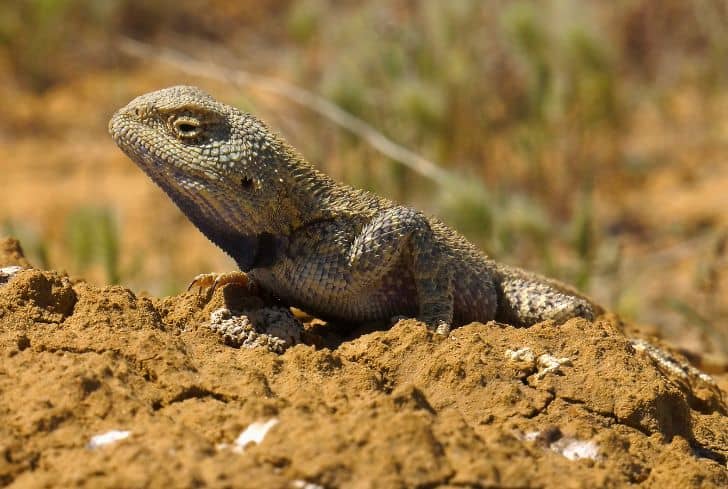 Most people seem to hate and fear lizards. Some find lizards creepy and worry that they can carry diseases. It is common to find lizards in homes, and people constantly seek ways to get rid of them. There is a particular belief that baking soda is one way to eliminate lizards. But will baking soda kill lizards?

You can get rid of lizards using various methods. Some methods involve chemical solutions and other natural repellents. However, most people like using natural repellents, which is why they prefer baking soda if possible.

Although domestic lizards are harmless, you might feel uncomfortable around them. This article answers whether you can kill lizards using baking soda. We also give you more information on effective methods to eliminate lizards and why they seem to love your home.

No, using baking soda won’t kill lizards. The chemical components of baking soda do not harm lizards. Bicarbonate soda also referred to as baking soda, is a salt compound. Since some people use baking soda to kill bugs, some individuals believe they can use it to kill lizards as well.

Baking soda kills pests by releasing carbon dioxide bubbles after they consume it. Lizards, however, don’t react the same way.

Baking soda does, however, kill lizards’ food sources. Pests such as ants, roaches, flies, spiders, slugs, caterpillars, and snails make nutritious meals for lizards. Any insect that comes into contact or consumes baking soda will suffer one of the following three effects:

While baking powder does not kill the lizards, it can drive them away. Lizards won’t remain in an area where they can’t get food.

What Attracts Lizards To Your House?

Lizards will come to your house in search of three things: water, food, and shelter. If your home has dark, cool areas where lizards can hide, don’t be surprised if you find them in dozens.

See also  Does Denorex Kill Lice? (And How To Use it?)

When you don’t get rid of insects( a lizard’s primary food source) from your home, you’ll attract more lizards. Another major attraction for lizards to your home is a leaking tap, as is neglecting to empty the water from your pet’s bowls.

Most house lizards that frequent homes are insectivorous by nature. They usually eat both flying and crawling insects. Crickets, caterpillars, spiders, flies, mosquitoes, and winged termites are a few of their preferred insects.  The size of the lizard determines which kind of insect it will eat.

Lizards don’t mind eating fruits and vegetables to add variety to their diet. When insects are scarce, certain animals—like the bearded-dragon lizard—eat vegetables and other vegetation types. Fruits are an excellent substitute since they keep lizards hydrated.

Lizards look for shelter in areas where they can easily hide. If your home is cluttered or has dirt piles, it will attract lizards. The crevices, cracks, and gaps around your home will be the ideal points of entry for lizards.

Other places where lizards might hide out include basements, storage spaces, and under bathroom sinks. Such areas must be kept dry and clean to discourage lizards from deciding they are cozy enough to establish a shelter there.

Lizards need water to survive. About two-thirds of the body mass of reptiles and amphibians is made up of water. Different lizard species require various amounts of water. Any water source you have within your home will attract lizards.

A lizard will choose to hang out in places with water leaks, kitchen sinks, pet bowls, or any other stagnant water around your home.

Does Ammonia Keep Lizards Away?

One of the compounds you can use to repel lizards is ammonia. Ammonia is a compound made up of hydrogen and nitrogen with a pungent smell and easily dissolves in water. It has a strong smell, repelling lizards.

If taken into the body, ammonia, a byproduct of the breakdown of proteins, must be excreted with water. Ammonia kills lizards when they absorb it into their bodies.

You can mop your floors by mixing two cups of ammonia with a bucket of water. Lizards will stay away from ammonia because of its strong odor. You only need to use the solution to clean twice a week to eliminate any lizards beginning to make nests in your home.

How To Get Rid of Lizards With Dettol?

Chloroxylenol is an antibacterial found in Dettol that kills germs and reduces inflammation. It is highly toxic to lizards and other reptiles, and amphibians. Pine oil, another poisonous chemical that can harm lizards, is also present in Dettol.

Even if the pine sol smell is fleeting, the lizards can be killed by simply inhaling it. A lizard that comes into contact with Dettol cannot flush off the poisons in its body from the two materials.

Dettol is a good option for removing lizards from your house; however, it is not recommended if you have pets. The same chemical, chloroxylenol, can be exceedingly poisonous for your dogs, cats, and birds. Cats and dogs will lick their paws, consuming Dettol in the process. Cats, in particular, struggle to get toxins out of their systems.

People who can’t stand lizards and have a phobia should use a tobacco and coffee mixture. Use a different method if your goal is to keep lizards away from your house instead of killing them.

How To Get Rid of Lizards From The House?

You’ll find it highly uncomfortable to be in your home when you notice a few lizards darting across your walls or flooring. You can get rid of lizards from your house in several different ways.

Most people are afraid of using insect repellents with chemical ingredients. They want to protect their family members and pets from the dangerous chemicals in repellents.

Why not use the following practical and safe methods to get rid of lizards from your house;

Essential oils have strong odors that lizards and other pests find unbearable. You can use essential oils such as peppermint, cinnamon, and clove.

Multiple essential oils are combined to create Lizard Defense Spray. Lizards won’t be an issue once you spray it about your yard and inside your home.

The smell of garlic and onions is powerful. Lizards generally don’t like strong odors and will stay away from them. The two primarily serve as irritants.

Garlic can be used directly or turned into a spray. You can soak some garlic and add pepper to make it more potent. Put the mixture in a spray bottle. Garlic Liquid Spray is available on Amazon if you don’t want to do all that work. Garlic cloves can be strung together on a thread and hung from your windows and doors.

See also  Will Lizards Crawl in Your Bed? (And Reasons For Crawling)

Spreading some onion pieces throughout the house is the easiest way. Onions contain sulfuric components that produce a powerful smell that lizards don’t like.

Where they can’t find food, shelter, or water, lizards won’t stay. You should drain any areas of your home with stagnant water, whether outdoors or indoors. Puddles, birdbaths, or kitchen sinks are usually the primary sources. Any leaking taps or pipes will provide a constant water source for the lizards.

Find ways to eliminate the insects that lizards like to eat, so there is no food available. If you get rid of the insects using natural repellents, the lizards will have to go outdoors in search of food.

You should remove any rocks, piles of trash, or wood in your yards that lizards could use as a hiding place. These places will provide shelter for the insects that will eventually attract the lizards.

What Do Lizards Hate the Most?

Lizards dislike intense smells and avoid places where they could encounter them. Some smells, like those of hot peppers, act as irritants and cause lizards to avoid any place where they can smell them.

When sprayed in various places around the house, the smell of hot peppers overwhelms lizards and prevents them from staying. The simplest thing to do is make your hot pepper spray.

You can make a spray by soaking some spicy peppers in water. Cayenne pepper will intensify the spray’s scent. Try planting pepper plants around your yard to stop lizards from coming close to your home.

Does Pine Sol Get Rid of Lizards?

The smell of pine sol repels lizards. It has a strong scent that swiftly removes lizards, especially if you use it for cleaning. The only disadvantage to using pine sol is that it only works while the smell is strong. Pine Sol can no longer effectively repel lizards once the smell has vanished.

Pine sol works best when combined with water. Fill a bottle with half pine sol and half water. Spray in the places where lizards frequent.

Although lizards rarely bite and are disease-free, they contain the salmonella bacterium. They typically release the bacteria through their saliva, urine, and feces. Therefore, eliminating lizards from your home is important.

Fortunately, we’ve provided information on what might attract lizards to your house and how to get rid of them.