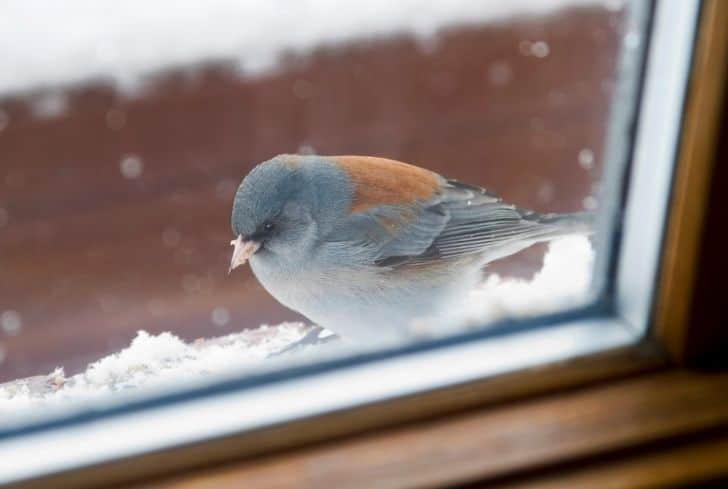 We love to call them nature’s flying machines- full of feathers, equipped with mighty wings, hollow bones with warm blood running through their veins.

They’re a pleasure to see, right? But this can turn around real quick before you know it.

You’re in bed on a brisk morning following a wet night, the next thing you hear is the constant chirping and pecking at your window.

Well, the sound of birds could be nice at times, but some individuals can’t endure the sound of singing birds, while others can’t stand it one bit.

If you fall into this category, there are simple methods in this article to implement that’ll deter these pesky creatures from smashing your window, chirping from outside and disrupting your peace and quiet.

Read on to learn more.

Why Do Birds Chirp Outside the Window?

Birds chirp pretty frequently, you may hear them when it gets dark, all night, and very early in the mornings. If you’ve ever wondered why they do this, you’re not alone.

It’s frequent late at night and early in the morning. The males most especially attempt to locate a mate, so they start humming or chirping late at night.

– Pet birds may chirp in response to stress, for attention. You might care to know that some bird species naturally call to other birds in the morning and at twilight as “talking” to one another typically calms them down.

– Another reason why birds chirp more is when it’s dark, and this is due to the low amount of light. This is especially true with some species, such as robins. If you pay attention, you’ll notice that several bird species become nighttime singers once the sun sets, starting their singing session early at sunsets and never stopping till daybreak.

See also  How To Keep Neighbors Vines Out of The Yard?

Birds chirp quite alright, but they cause you disturbance because of their proximity to your residence, especially where there are fruit trees that provide convenient access to food.

No doubt, birds love to build their nests in comfortable places so that they settle there after a long day of flying. You end up becoming next-door neighbors with their chatters and chirpings invading your privacy.

Sometimes, birds nurse their newborns and this comes with a lot of hatching and chirping for food now and then for a few weeks.

7 Ways to Stop Birds From Chirping Outside Your Window

What better way to keep birds away from your window than using what is proven to work against a variety of birds. We call it a scarecrow /visual repellant method.

The idea is to install an element near your window or close to your house that scares the birds away from the surrounding area.

You do this by using terrifying contraptions to deter the birds from flying on your land, just like a scarecrow in a rice field.

How do you go about it?

You can use the silhouette of a predator or a more frightening animal-like hawks, cats and owls lurking. Feel free to use other high-tech approaches, such as automatic water sprays, flashing lights, CDs whose reflections scare the birds away from your window side.

Try it, and you’ll see it works; birds never want to be near things like these.

2. Get rid of the bond: their nests

Come to think of it, that’s their resting place. If sound and visual scaring seem not to be enough, the next step is to remove the birds’ nests daily till they stop making one.

We suggest you take out time in the morning after they’ve departed to remove what they’ve left behind. When their nests vanish repeatedly, they might sense a signal that the region is no longer secure for them.

No nest, no birds; no birds, no chirping outside your window. Great, isn’t it?

3. Keep their source of food far away

It’s natural; birds seem to be incapable of staying away from where they get food- a sustainable supply.

See also  Can My Neighbor Grow Ivy on My Fence? (And How to Stop it)

The question is, do you have anything that could attract and keep them around, especially every morning?

If they’re close to your home, it’s likely that the food supply is as well.

With the installation of a bird feeder far to your property, chances are they’ll stop coming as they’ll be attracted to that.

Be careful though, you should place it at least 50-100 feet away to reduce their proximity to your property and eventually to your window.

4. Act as though they aren’t around

The idea here is to make sure that the noises of birds are effectively muffled, so you don’t get bothered, disturbed or distracted.

Making use of something that is already in the house to take your attention from the noise, that way, won’t make any difference to you what the birds are doing outdoors.

– To mask the sounds of chirping birds, you can use a fan in your room

– Also, you can purchase and use earplugs

– Sleep with a pillow over your head

– Move to a different part of your home and sleep there.

This isn’t a bad idea, trust us. The noise will be reduced, and you will be able to sleep soundly in the morning without worrying about the birds acting up.

Now we don’t want to hurt them.

Here’s what you’re going to do: place bid spikes on the window sill. The metal spikes prevent the bird from perching on the ledge and stop it from pecking at the pane.

Anti-pigeon spikes are useful in areas where pigeons typically perch, such as facades, roofs, beams, gutters, chimneys, and so on. It’s meant to discourage them from perching.

They’re quite simple to install and have been effective for many people who have problems with these flying machines. The anti-pigeon spikes are made up of a spiked strip that prevents pigeons from perching

Since you want to keep birds from chirping outside your window, use a non-toxic liquid bird repellent on the windowpane where they land; some paste repellants most likely produce a sticky covering that will keep birds away.

7. Net barriers: the way to go

This strategy effectively denies birds access to certain sections where they like to land, for example, nearby trees and nests.

You can find plastic nylon nets in hardware stores. Use enough nets to cover the trees where they like to land and build their nests to ensure no little birds remain in the tree or surrounding area.

What Can You Put on Your Window to Keep Birds Away?

Many might say that the bright colors aren’t their thing, but a bird tape lasts long and makes it simpler to put the proper spacing of lines across your window due to its collision-proof feature.

Once a bird sees this, it senses a barrier and finds somewhere else to go.

With this one-way set up, you can still see what’s happening outside your window however the birds won’t be able to see through clear, colorless glass.

It’s good to install a transparent film if you prefer the simple, no extra stuff clouding your window.

You can add mosquito screens to your window as an additional layer.

Yes, they keep bugs out, but they also keep birds from flying near your window. Depending on the size of your window, there are various styles and sizes of screens.

A quick tip: Look for a mosquito screen made of strong material and composed of black mesh so birds can easily see it from afar.

These tools effectively break reflection coming from the exterior. The stickers have to cover most of the glass to effectively discourage birds from your glass.

Reflective window blinds prevent sunlight from refracting back into the room. Not only that, when you cover your window with interior and outdoor blinds, hardly will the bird see itself, it will also be unable to make touch with the glass.

Like the blinds, awnings or canopies shield you from the sun’s glare. They come in various styles like retractable awnings that may be rolled up when you want more light to get in, fixed awnings, motorized awnings that use sensors and portable awnings.

We admit that birds could be disturbing, especially when they find their way where they aren’t meant to be. Which of these methods do you think will be most effective in keeping these warmbloods away from your window?

Feel free to share your thoughts, we’re more than happy to hear from you.