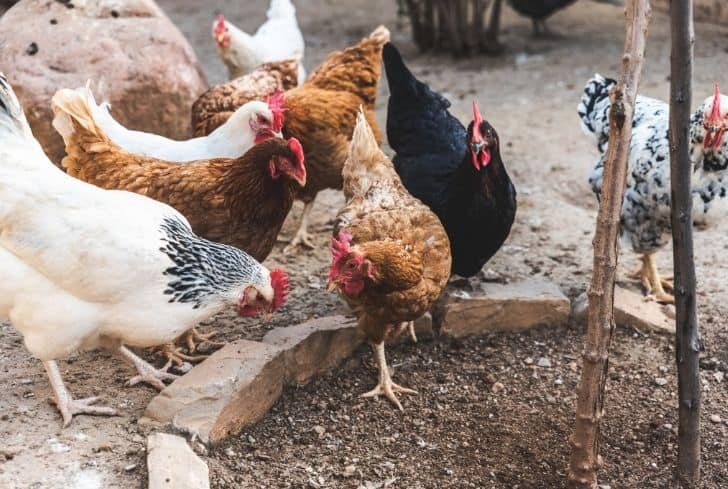 Doesn’t it sound interesting that a weasel’s body color is similar to bread and cheese? Well, don’t be fooled. This tiny, flattened head creature carries huge black eyes that stick out on its face, with little wicked paws and legs creating nothing more than a centimeter long track and graced by sharp, hairy claws.

All of these qualities give the weasel a youthful look, but nothing could be farther from the truth: The weasel is a hungry and adept hunter that eats rodents, rabbits, and reptiles as its primary food.

Although weasels prefer rats over chicken, they usually only go for poultry when the rat population is declining, elusive, and tenacious enough to never leave an area until their source of the food supply is no longer available.

How then do you protect your flock before these ferocious creatures? Keep reading to find out.

Why Do Weasels Kill Chickens?

Do you know a weasel may almost single-handedly wipe out a flock of chickens, turkeys, and other fowl, according to poultry producers?

What could be the cause of this?

We believe it’s in the nature of a weasel. First, you need to know that there are other predators after the lives of your chickens. Rats, for example, are a menace to poultry.

The interesting thing is weasels who hunt rats as they’re the ideal delicacy. What then happens when the rat population declines? They must continue to feed now that rats have been destroyed.

Weasels then turn to chickens as their feeding source. If you give them the chance to assault your birds, they will gladly accept. Sometimes, they may go as far as killing birds without eating them by severing the spinal cord with several bites to the base of the skull- this nature is probably due to their carnivorous and hunter instincts.

The weasel murdering chickens is triggered by their wild, squawking, and flapping movement, which causes it to continue killing until there is nothing left to kill. It seeks to murder as many victims as possible, intending to reserve the remainder for future meals.

If your chickens’ intestines have been taken or partially devoured, there’s a good possibility a weasel has invaded your coop.

There are several ways to keep your chickens safe from weasels and they fall into two major categories:

A blend of the two goes a long way to keeping your chickens safe:

1. Clear the area around the poultry cages, coop, and chicken coop of any probable hiding spots.

2. Trim shrubs and ivy while cutting tall grasses and weeds. The objective is to get rid of anything that a weasel would be able to hide beneath or behind the chickens, as well as any unwary stem.

3. Clear any heaps of wood, trash, or debris that might serve as a hiding spot for a wary weasel. Poultry predators don’t like being out in the open, so creating a broad route around poultry areas may be all that’s required to keep the flock safe.

4. Clear any foliage that blocks a straight view of the chicken and coop enclosures from the main home or structure.

5. Repair any damage to the property’s structure and reinforce your poultry coops to prevent access to them. The weak fortress in your property shouldn’t be the reason for your poultry loss.

6. Go DIY: weasels are nocturnal hunters, so the owner of the chicken coop will have to go without sleep for one night. You hide in a remote location and wait for the creature to show up from the forest. Jump out of the shelter as the weasel reaches the chicken coop, throw a blanket or tarp over it, and force it to the ground, not allowing it to wiggle and scrape the fabric covering it. Then grasp the neck and place it in a cage that has already been made.

To avoid bites, compress your nose with your fingers to open the animal’s mouth, then put a gag or wooden block in its mouth.

7. Use simple traps: on a stand near the coop, a wooden box or metal bucket is placed upside down. As bait, the meat is placed beneath the structure, the predator fractures the structure in the process of getting to the flesh and it gets trapped when the support collapses.

See also  Can You Park a Boat on The Street or Driveway?

They obtain or construct a cage with a door that falls when a living being enters.

8. Use mouse traps: weasels are small; big mouse traps, sometimes known as rat traps, are frequently used to catch them. The traps look like a wooden box or a metal mesh box with a hanging block linking the passageways inside.

The middle of the trap is baited with a goodie. The animal that has been tempted by the bait runs down the block and falls into the chamber, where it is trapped.

9. Use motion sensor: low-frequency noises that are not picked up by human hearing organs, but which trigger fear and the impulse to flee in tiny animals. When a live thing approaches, the lighting gadget with a motion sensor goes on. The invader is scared off by the bright lights and loud signals. This gadget is usually mounted directly on the chicken coop’s wall.

10. Clear the rubbish from the area surrounding your chicken coop. Regularly mow the grass around the coop, as well as any weeds in the area.

11. Use high-performance wire mesh to encircle your hens. Make sure it’s no more than three feet tall, and consider layering it for more support.

12. Maintain the cleanliness of the cage. Place food in resealable containers with heavy, tight-fitting lids, then brush any debris or food onto the floor.

Weasels are very skilled climbers, they also have the ability to scale fences, barriers, and tunneling.

There’s little chicken wire can do to protect your flock, therefore don’t use it for your coop. To keep your flock safe, make sure any wire mesh on your coop is properly fastened since predators can force their way through areas where it isn’t.

To keep the chicks from leaving and the weasels from entering, use wire mesh with a diameter of less than 2 cm.

What Else Do Weasels Eat?

Weasels don’t only delight in devouring the flesh of rats and chickens, they eat a variety of other animals. Because this animal has a high metabolism, it has to spend a considerable portion of its day hunting and taking down animals many times its size.

Here’s a breakdown of the feeding portion of weasels:

–Mice and rats account for 60.6 percent of all rodents.

-Small birds which include sparrows, pigeons, robins, quail, and other small birds take 7.1%.

–Lizards and even tiny snakes make up 5.5 percent of the reptile population that weasels feed on.

–Toads, frogs, salamanders, and tadpoles make up 4.7 percent of the amphibian population.

–Seeds and fruits have 4.4 percent of the total.

–Carrion is only used very seldom and only when there is no live food available.

What Other Predators Kill Chickens?

Other predators other than weasels exist and yes, they are dangerous to your chickens’ existence. You should be aware of and protect your flock against a variety of them.

–Dogs: Feral dogs prowl the countryside at night in search of prey to kill; if hens are not adequately protected, they may wind up in the jaws of these creatures.

–Foxes: they are the chickens’ most daring adversary because they utilize their cleverness to track them down; they can capture many in one night and consume them in the pen or bury them just to eat later.

–Snakes: except in extreme cases where the snakes are enormous, adult chickens are usually avoided in favor of chicks.

–Bird Raptors: many birds, such as eagles, goshawks, hawks, and falcons, keep an eye out from the skies, and if our chickens produce babies, they may capture them.

–Rats: They can readily get into the chicken coop and seek eggs, and if they are hungry enough, they will attack the chicks.

–Stoats and badgers: They are little creatures that prey on chickens and can fit through any opening in the coop due to their small size.

Mustela is the smallest carnivorous mammal on the planet whose lovely look is in stark contrast to his fierce and secretive personality.

It can be very disturbing to see that they attack and feed on your chickens. Therefore, you can either stop them from continually attacking or keep them from even making an attempt.

Which of these measures would you use from now on? Share your thoughts with us.