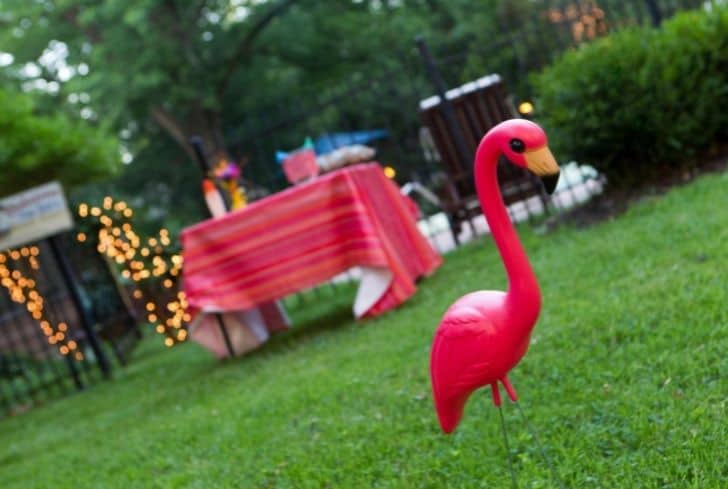 Have you ever wondered what a pink flamingo in your yard means? You’re not alone.

Flamingos in real life are social as could be, walking around lagoons and salt lakes with their long and beautiful form.

What about the modelled ones? Their enormous pink inflatable version continually shows up on beaches, swimming pools and now in yards. What is it about this air-breathing creature that captivates us and makes us think differently?

Flamingos’ origins are unknown, and scientists have struggled to categorize them. They can be compared to storks and herons based on their skeleton and musculature, while the conformation of their beak and voice link them to ducks and geese.

What is the Meaning of the Pink Flamingo in the Front of Your Yard?

The live pink flamingo on its own symbolizes happiness and peace. Flamingos express our friendly nature and desire to form trustworthy communal relationships.

The pink flamingo’s meaning has evolved over the years, from entertaining kitsch to charity-focused flocking fun in the new millennium.

Now, what does it mean when you find a bunch of pink flamingos in your front yard? This will explain better.

You see, fundraisers and charity have built up flamingo “invasions,” or flocks of fake flamingos, in recent years.

If an organization seeks some financial support, they “flock” people. It means they set up a flock of flamingos in the yards of houses or businesses in the dark on a regular basis, with a notice accompanying the flock. The placard explains why the flock is being placed there for philanthropic purposes and names the charities.

The recipients of this flocking can then pay a fee to have the flock removed, choose a new recipient, and the flock will be moved to another yard. This usually lasts until the end of a fundraising event.

A key characteristic of flocking is that at the bottom of the notice, a friendly recommendation is made that if the person is unable to pay at the moment, the flock can be removed at no cost. This keeps flocking’s fun reputation while still respecting others.

See also  Can I Remove Utility Flags in My Yard?

As one could assume, some folks don’t like it when they’re flocked, it’s normal and not everyone appreciates unpressurized gestures even in the slightest manner.

But for the most part, it’s a pleasurable activity that benefits a good cause if you do it well. Simply select your objective carefully, and the charity run will go off without a hitch. Otherwise, your receiver may delete the flock and discard it, or they may opt to ignore it entirely which you don’t want.

Origin of the Plastic Pink Flamingo in the Yard

In the realm of American turf kitsch, it was a bleak day. After a lengthy illness, Donald Featherstone, the New England artist who created the national emblem known as the world’s plastic pink flamingo in 1957, died at 79.

No one has had a more significant influence on the American front yard than Don Featherstone, save from John Deere himself. Featherstone was a sculptor who schooled at the Worcester Art Museum, is most known for his work for Union Products. He worked as a designer for decades before becoming president of Union Products until his retirement in 2000.

A breakthrough happened when Diego, the world’s first lawn flamingo, was created by American artist Donald Featherstone in 1957 and he was given the Ig Nobel Prize for a “ornamentally evolving creation” four years before he retired.

Of course, Featherstone created something far more than a mass-produced plastic lawn ornament. The lawn flamingos were instantly popular with the general public, and their free initial pricing assured them that they flew off the shelves.

The flamboyant pink flamingo evolved into something more: a flamboyant declaration of independence and a hot pink badge of individuality.

Not long after as you’ll assume, a vocal middle finger rose from the upper class American collective, and Featherstone was credited with “making inexpensive terrible taste accessible to the American public”.

The skinny-legged lawn decoration has become associated with outrageous conduct, a monument to lousy taste, the kitsch symbol that ends all kitsch icons, according to John Waters’ cult masterpiece “Pink Flamingos”

Then came along director John Waters, who propelled Featherstone’s creation into the cultural consciousness in 1972, after several years of unsettling suburban monotony.

See also  Can You Bury an Extension Cord Outside? (And How to Do it?)

Pink Flamingos, a classic 1972 film, had one of the early renderings of the ornament. The film reintroduced the ornament to America, since it was sarcastically hailed as a lowbrow symbol.

The pink lawn flamingo was reintroduced as America’s unofficial bird following the film’s popularity. The sarcastic wave was in full flow, with the flamingo (now a well-known design motif) at its epicenter

Flamingos made a comeback on vases, tablecloths, and other ornamental items. Since 1986, the Flamingo has been available as an accessory, often associated with retro romance, particularly since the governor of Massachusetts (the birthplace of Union Products) attempted to rehabilitate pink plastic in the public’s eyes in 1987, describing it as “a significant contribution into folk art.”

Cute pink long-legged birds began to appear in home decor a few years ago. Pink flamingos may be seen on fabrics and walls, candles, plates, figurines, children’s toys, and presents, to name a few design elements.

Flamingos in the Yard For Birthday Meaning

Count yourself lucky when you find flamingos in your yard one pleasant morning. Flamingos are used to commemorate a variety of occasions like birthdays.

In fact, Flamingos in the yard are a favorite birthday present for friends and family. People and innovators are now going into the business of surprising people using these plastic animals.

In the modern sense, a typical process goes like this:

That way, the birthday boy or girl or even adult will be so delighted when they wake up in the morning. Expect them to get tickled pink because they weren’t expecting much.

Things to Keep in Mind Before Flocking

Before you start swarming individuals with flamingos at random, we recommend that you definitely notify the town or municipal authorities, as well as the local police agency. A flocking recipient may misread the situation and your gesture and end up reporting the pink flamingos and trespassing to the police and the local authorities.

See also  Can You Kill a Skunk With a Pellet Gun? (Answered)

This gives you the chance to avoid difficulties and a wrecked fundraising event by obtaining their consent ahead of time and informing them that this is for charity through your organization.

Additionally, you should develop as large a list of probable flocking targets as possible to increase success chances, businesses and residents should be included in your list.

Apart from being used as a tool for flocking and seeking charitable help, pink flamingos excel at serving other impossible purposes.

Let’s have a look:

–Pink flamingos have the added benefit of being fantastic conversation starters at events. For example, if you’re at a party and you want to pick a common ground or subject of discussion, if a pink flamingo happens to be present, you’re good to go.

They provide conversation starters for your visitors or party guests as you break the ice. As a bonus, you won’t have to break the budget to add these decorations to your garden if you’re the host.

Fun fact: Do you know that the meaning of “flamingle” according to Urban Dictionary, is “the act of trying to socialize but being so clumsy that you transform into a flamingo!”?

–They serve as an anchor to decorative factors in our daily lives. Some time ago, the Aztecs wore flamingo feathers in their kings’ headdresses, which were adorned with jade and gold beads. Because of its pigments, the plumage of these migrating birds was a sign of authority.

–Pink flamingos are known for their open-mindedness, team spirit, and family. Their species always live in communities in salt flats and marshes.

These creatures remind us of these community values whenever we see or hear of them. No doubt, a reminder is essential to progress in the world today.

–It serves an aesthetic purpose.

Wherever you decide to have the party, make sure you have all the necessary flamingo party decorations.

Everything always seems a bit unclear until the curtain is opened. We’re sure this article answered your question.

When it isn’t your birthday, a flamingo in your backyard means you’ve been flocked, and the senders are seeking your assistance financially towards charity.

When it’s your birthday, feel free to relax and enjoy the treatment you get, you deserve every bit of it!