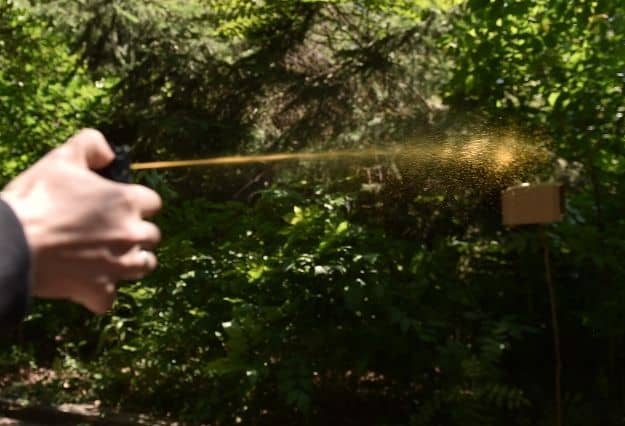 If you reside in a neighborhood with tons of dogs roaming the street, simple tasks like jogging, walking, or stepping out of your home can be challenging. You have heard reports and seen people that got beaten by a dog in the same neighborhood. So, certainly, you would want to tread with caution.

Having a self-defense tool, like pepper spray, can help you prevent dog bites. But the question now is, can you pepper spray a neighbor’s dog?

If you’re facing this sort of dilemma, you’ll gain more knowledge about using pepper sprays on animals, including the position of the law on the matter from this post. Read on!

Is It Legal To Pepper Spray a Dog?

Can you name the states in the country that’s against the use of pepper spray as a self-defense weapon? Not one. In other words, anyone can use pepper spray. It also means that you can carry pepper spray around. Even if the cops find one on you, they won’t harass you.

However, there are certain conditions whereby the use of pepper spray is considered acceptable. In such situations, you won’t get into trouble if you decide to use it. Nevertheless, it’s advisable to familiarize yourself with your local laws so that you can act within the law regarding your use of pepper spray.

So, is it legal to pepper spray a dog? The straightforward answer is yes. It’s a self-defense weapon. Thus, if the dog is acting all aggressive towards you, protect yourself. And how do you do that? You can have the aggressive and dangerous dog pepper-sprayed.

In this case, no matter what happens, even if your neighbor reports to the police, they might be the one in trouble with the police for letting such an aggressive and dangerous dog roam the street.

The Centers for Disease Control report indicates that approximately 4.7 million dog bites occur in the country annually, resulting in 16 fatalities.

So, which is better? Pepper spraying a dog or get bitten by it? Of course, pepper-spraying will ensure you don’t end up in the ER.

See also  Suspicious Car Parked in Front of My House: What To Do?

Is Pepper Spray Lethal To Dogs?

No, pepper spray is a non-lethal weapon. Thus, it won’t kill your dog or cause permanent damage to your canine’s eyes, nose, or skin. What it does when sprayed is cause discomfort.

The pepper-sprayed dog would experience a burning sensation in its eyes, nose, skin, and mucous membrane. The pepper spray will prevent the dog from launching an attack and inflicting injuries on you.

A Handy Tip: Pepper spray has the same effect on dogs as it does on human beings. Even if sprayed directly on the dog’s face, with the possibility of some of the spray getting into its eyes, it won’t damage the dog’s eyes. It would only buy you some time to escape from the scene or get help.

Is It Legal To Pepper Spray a Cat?

Using pepper spray on a cat would stop an aggressive cat from attacking you. But you need to know what the legality of such a situation is where you reside. The law on the use of self-defense weapons such as pepper spray varies from state to state. And it’s important to know what the law states in your place of residence before taking such actions.

But even if it’s legal to use pepper spray to stop a cat from attacking someone where you reside, do you need such a weapon to stop an aggressive cat? You don’t need it.

Cats can be super aggressive sometimes, but are they big enough to kill an adult human being? No, they aren’t. The worst they can do to you is to scratch your skin and bite you. But the injury won’t be that severe to land you in the emergency room.

Spraying water from a water gun at the cat is enough to scare and cause them to run away. If cats keep digging up your garden, have the area sprinkled with some ground black pepper. Cats hate this pepper’s scent. Thus, they would run away if you spray the area with such.

So, in a nutshell, you don’t have any compelling reason to pepper spray a house cat because it’s not big enough to kill you. If it’s legal in your area, you may get away with such an offense.

Yes, pepper spray does expire. Depending on the brand, expect yours to expire within 2 to 5 years. However, please consider replacing your pepper spray every 12 to 18 months. And don’t use expired pepper spray for any reason.

So, imagine spraying an expired pepper spray on a dog, and it only works for a few seconds or minutes before the dog regains itself. You would land yourself in big trouble because you have annoyed the dog.

So, avoid using expired pepper spray. Check your spray regularly to know the expiry date before putting it in your pocket or bag and stepping out of your house.

Can You Go To Jail For Pepper Spraying Someone?

Pepper spray is for self-defense. If a dog or human acts aggressively, you can pull out your spray and release it on them. Now, the question is, can you go to jail for using your pepper spray on someone?

Well, it depends mainly on the situation. Pepper spray is treated as a legal self-defense tool in all 50 states in the US, but that doesn’t mean you can pull yours out and spray it on anyone you deem fit.

If you use it on someone that’s trying to pull a gun, rape, or want to harm or steal from you, you won’t go to jail. It’s simply an act of self-defense.

However, if you use pepper spray on someone because of a disagreement, then you can go to jail. You can only use pepper spray for self-defense, not because you’re angry at someone or you don’t like someone

In California, using pepper spray on someone because you’re angry with the person or in some way not considered self-defense, is a criminal offense. The punishment for such an offense is 3 years in state prison, a fine, or both. In some states, you’ll be charged for assault and battery.

Can You Use Pepper Spray on Someone Harassing You?

Using pepper spray to wade off an attack isn’t an offense. Even the person you sprayed it on can’t press charges against you. But then, know that you can only use these self-defense tools on attacks considered proportionate and forceful.

If a person is trying to pull a gun, overpower or hit you, you can use your pepper spray on them. But if you use pepper spray on someone because the person was looking at you in a way you didn’t like, then get ready to face the law.

The court will find your reaction unnecessary, inappropriate and punish you accordingly.

Can Pepper Spray Help to Prevent Dogs From Fighting?

So, if you can avoid pepper spray and try other means to stop dogs from fighting, please do so for the sake of your dog. If you must use pepper spray, ensure your dog is safe.

So, can you pepper spray my neighbor’s dog? Well, if you’re looking for the perfect answer to the question, this post is for you. You can pepper spray your neighbor’s dog but you must be in situations that require self-defense. Was the dog aggressive towards you?