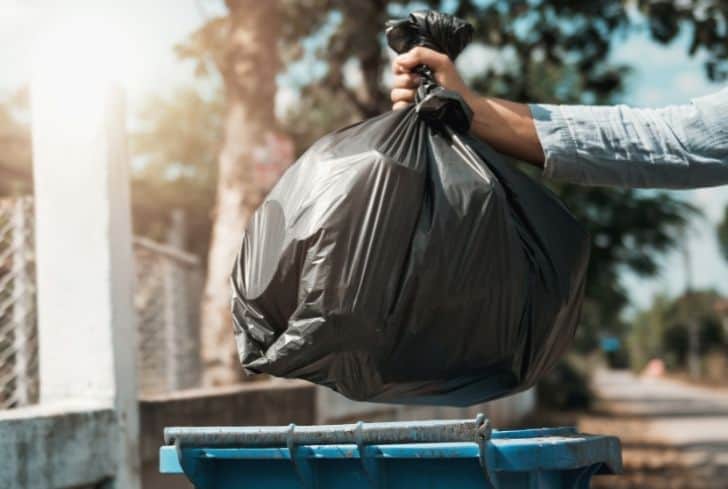 A garbage disposal can be a daunting task, but it is a very important task that has to be done to keep the environment clean and hygienic. Not disposing of your trash properly will end up leaving foul smells and odors in your kitchen, window, or wherever your trash can is located.

The trash disposal problem can become even more daunting when your neighbors decide to dump their trash into your trash can. That means they refuse to dispose of their trash and instead pass the work to you for no reason whatsoever.

Annoying neighbors with such an attitude can be handled in several ways, which you will be exposed to in this article.

What Can I do if my Neighbor Keeps on Putting Trash in my Can?

1. Talk to them politely about the issue and see if you can develop a solution together with such a neighbor. But this is only possible if you know which neighbor, in particular, is putting trash in your bin.

2. You can put up a notice warning whoever is putting trash in your bin to stop or face the consequences. This is the best approach when you do not know which neighbor is putting the trash into your bin.

3. If they refuse to listen, particularly if it’s a neighbor, you know. Then go ahead and get their address or name so you can file a complaint or call the authorities.

How Can I Stop My Neighbors From Putting Trash in My Bin?

If you have spoken to your neighbor severally to stop dumping their trash in your bin and they have refused to listen, you would have to find some other means of getting them to stop.

This means also works effectively if you are unaware of which neighbor is perpetuating this act. There are several ways to stop your neighbor from putting their trash into your bin. Some of them are:

Install a CCTV camera outside your home; the camera should have a view spanning the location of your bin. The camera would help you see which of your neighbors is responsible for filling up your bin and increasing your bill if you pay for a garbage disposal service.

It will also serve as great evidence and possibly a way to determine what time and day this mystery neighbor completes his act.

Buy bins with locks or those that have any lock system on them, with an alarm that trips when someone tries to open them without unlocking them first. This will ensure that you will get alerted when your neighbor tries to force open the bin.

The alarm would put such a neighbor off and stop them from coming to dump trash in your bin even when you’re not home. Getting a bin with locks is a way of informing whoever the neighbor is that puts their trash into your bin that they should stop.

If you find the culprit neighbor putting their trash into your bin using your installed camera or the alarm lock bin, you can then confront them and threaten to make an official report to law enforcement or the city garbage authorities if they do not stop.

4. Make your garbage can inaccessible

This would be more effective because if you leave your garbage can on the public street, you would not be able to do much about stopping your neighbor(s) from putting their trash into your bin.

Is it Illegal For Neighbors to Put Trash in My Bin?

If you do not produce plenty of trash and neighbors use your garbage can, you would probably not see it as a big deal. But there are garbage laws that vary from city to city; you would need to know which operates in the city you live in.

See also  Do You Need a Permit For a Driveway Extension?

That unauthorized entry to dump trash is already trespassing which is an offense by law. If it is privately owned, the use of a dumpster without the owner’s knowledge is an illegal act of dumping and is tantamount to stealing the owner’s paid service.

Can My Neighbor Move My Bin?

Some people overlook certain things whenever it comes to issues concerning garbage cans. But the truth is there are laws regarding trash disposal and management meant to guide citizens on their conduct with the trash they generate and how they dispose of them.

For the issue of the legality of moving trash cans, it is illegal for your neighbor to move your trash can if it is not blocking traffic or the street and is placed on your property.

Is Garbage on the Curb Public Property?

This can be a little tricky in the sense that garbage remains the homeowner’s property but ceases to be private property when they are taken out to the curb for collection by garbage collectors.

Once the garbage is placed in that place as the curve, the house owner has forfeited their ownership rights to the trash and any other items in the garbage can, as the property is now in the public domain.

In some cities, some areas of trash waste processing are designated as restricted public areas by the authorities. For such peculiar cases, the trash is not open to the public.

To avoid getting in trouble with the waste collection authorities or your neighbors at any time because of your trash and how you manage it. You need to know and understand the garbage disposal norms and etiquettes. Some of the waste disposal etiquettes areas listed below:

You should bag up your trash nicely and tightly to avoid a foul smell oozing out of the trash can. Tightly containing your trash would ensure that a reduced microbial activity would occur on the trash while it is in the bin before trash day.

See also  Neighbors Dumping Rubbish on My Property: How to Stop Them?

2. Do not dispose of food before trash day

This is a very big concern. Try as much as possible to not dispose of remnant food before trash day to avoid critters from feasting on the food. This can be hard to maintain, but there are two ways to keep food out of the garbage can till trash day.

They are: put waste food into ice cream plastic buckets and preserve this in the freezer till trash day before you empty it into your main trash bag. The other way is to remove waste food and leftovers out to the trash can on the trash day.

3. Periodically wash out your garbage can

This is necessary to avoid could odor in a case where food or any other substance had slipped on your garbage can these begin to ooze out smell if not washed. It gets worse than you see maggots in your garbage can.

4. Trash cans should not be filled to the point of overflowing

This leads to eyesores to people passing by your trash can. If your can gets overflown with trash, the trash begins to drop, and contents leak onto the streets, leading to stains on the concrete.

Regularly disinfect and clean your recycle bins to avoid insects and their likes.

6. Bundle recyclables and secure them

Always put all recyclables bound together and secure them before dropping them off at the trash can to avoid them littering the whole place. It is prohibited that you discard loose items into your recycle bin.

Conclusion: Can you Stop Your Neighbor From Putting Trash in Your Can?

Garbage disposal and management should be taken seriously at all times to avoid litter and unpleasant odor that would come from unkempt garbage cans. Neighbors putting garbage into your garbage bin can be very annoying, but you should handle such situations properly to avoid escalation to much worse situations.

There are several ways of confronting neighbors who continuously dump their trash into your trash can. As listed in the article, use one of those methods to stop your neighbors from using your bin. Finally, practice the proper garbage disposal etiquettes as listed above for the good of your community and good living.