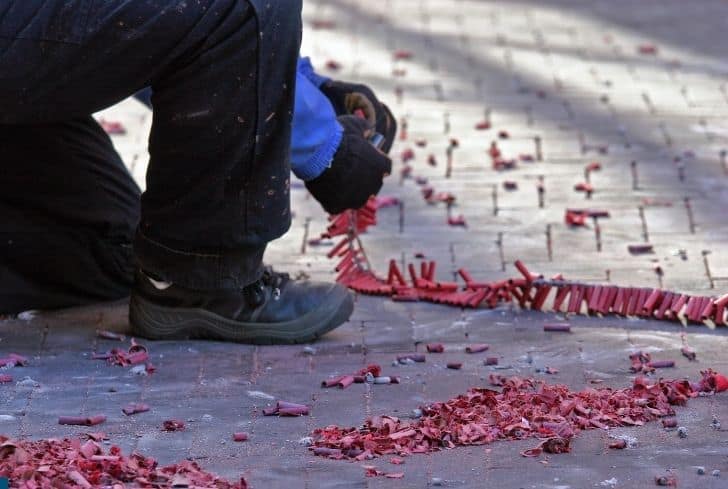 Fireworks seem like the perfect thing to use during celebrations in many countries, most especially the Fourth of July which is a time for celebrating America’s independence with parades and barbecues.

No one can deny that fireworks are visually stunning. However, for some people, the sound of fireworks can be unbearable.

Your neighbors are lighting off fireworks, which seems okay at first, but what happens when your neighbor doesn’t know when to stop?

Keep reading to find out exactly what you can do about it.

What Can You Do If Your Neighbors Keep Lighting Off Fireworks?

You can do enough to put an end to the incessant lighting of fireworks. They’re attention-catching, and the act of watching them go off can be fun, but it can’t be denied, those fireworks if left to go wild are dangerous.

According to a survey released just in time for the Fourth of July, fireworks injuries are on the rise in the United States. There were 136 deaths from fireworks usage between 2005 and 2020, or 8.5 deaths per year on average.

Because of these major dangers, it’s right to take action against the bothersome effects in several communities.

Now, dealing with noisy neighbors during fireworks season can be tricky, here are 4 things you can do to help you handle the noise:

–First, try talking to your neighbors and see if they’re willing to tone down the fireworks displays. It’s good to have a conversation with them about their noise levels and let them know that you prefer to not have your peace disturbed by loud noises.

That way, you’ve given them a chance to adjust their behavior before taking more drastic measures. It’s easy to get angry and want to lash out, but it’s important to remember that being respectful and understanding will usually get you further than being confrontational.

-If talking doesn’t work, try making a formal complaint with your landlord or homeowners association.

-If that doesn’t work, consider investing in some sound-blocking earplugs or white noise machines.

-You can also reach out to your local law enforcement or city officials and see if there’s anything they can do to help mitigate the situation.  Of course, you don’t want to do this unless absolutely necessary, but sometimes it’s the only way to get some peace and quiet.

See also  Neighbor's Car Alarm Keeps Going off: What To Do?

Is it Illegal To Shoot Fireworks in a Neighborhood?

If you have someone who enjoys fireworks, make sure you do so safely and legally by checking local ordinances first.

For example, each fourth of July, Americans celebrate their independence by shooting fireworks, however, many people are unaware that there may be local ordinances in place that make it illegal to do so.

So, before you set off any fireworks this year, be sure to check with your city or county government to find out if there are any restrictions in place. Some municipalities only allow professional displays, while others have outright bans on all fireworks. Ignoring the law can result in significant fines, so it’s important to know what is allowed before you light up the sky.

Your local municipality may have its own restrictions on fireworks, including a curfew time at night.

Who Do You Call to Report Illegal Fireworks?

If the question is on your mind, don’t worry because it’ll be answered.

In many states, it is a crime to use or possess fireworks without a permit. If you see fireworks going off in your neighborhood after hours, you may be wondering who to call. You can report illegal fireworks to the police or fire department.

For your benefit, here are some instances when you can call 911:

–If you suffer a firework-related injury, for example, an injury to the eye or body parts that have been severed.

–When the use of fireworks eventually ignited a fire.

–If your next-door neighbor is setting off illegal fireworks.

Alternatively, call the non-emergency number for the local police department.

In most cases, it is best to call 911 so that authorities can respond as soon as possible. If the situation is not an emergency, you can also look up your local non-emergency number online or in the phone book and give them a call. Be sure to have any important details ready when you make the call, such as where the fireworks are coming from and what time it is.

See also  Neighbor's Dog Keeps Jumping My Fence: What To Do?

Illegal fireworks are a major problem in many states and every year, thousands of people are injured by fireworks, and many of them are children.

In addition to the injuries, fires caused by illegal fireworks cost millions of dollars in damage each year. If you see someone using illegal fireworks, it would be best to do the needful, it’s better to be safe than sorry!

Wondering what happens to those reported?

The consequences for using fireworks illegally can be either a fine or imprisonment, depending on the state law.

Why Are My Neighbors Shooting Fireworks?

It’s easy to jump to conclusions based on your judgment and emotions. Nevertheless, it’s important to find out the reason your neighbors could be shooting fireworks, whether during the day or late at night.

There are a few possible explanations for why your neighbors are shooting fireworks, let’s explore some reasons they can’t seem to help it:

– Independence Day: Some Americans choose to set off fireworks at all hours of the night, much to the annoyance of their neighbors in order to join in the annual celebration of independence. Fireworks are often used to celebrate Independence Day in the United States.

Some neighbors might not set off fireworks during the day but at night because they want to avoid crowds and celebrate the holidays on their own, so to say.

– Some people believe that setting off fireworks at night is more visually appealing.

-How about this one? Others may think that they won’t get in as much trouble for setting off fireworks late at night.

– Some people may be setting off fireworks at night because they have to work during the day and can’t participate in daytime celebrations.

Can You Call the Police Over Fireworks?

While we all love to celebrate with fireworks, sometimes they can get out of hand. If you’re wondering whether or not you can call the police about noisy or reckless fireworks, let’s find out.

The answer is yes, you can call the police about fireworks. However, it’s important to keep in mind that they may not always be able to do anything about it. If the noise is coming from private property and isn’t disrupting the peace or causing any damage, then there’s not much they can do.

While local laws vary, in general, it is not advisable to call the police over fireworks unless they are being used recklessly or causing damage.

See also  What Does a Pink Flamingo Mean in Your Yard?

If you are concerned about fireworks, your best bet is to talk to your neighbors first.

Can You Sue Your Neighbor For Fireworks?

The answer may surprise you!

If you live in an area where fireworks are not allowed and your neighbor is one of those people, you may be wondering if you can sue them for setting off fireworks.

First and foremost, the answer rests on the stated laws in your state.

If fireworks are allowed, you need to ask yourself “has any harm been done during this process”? Regrettably, it would be best to know that lack of sleep or being frightened by an unexpected fireworks display is not a perfect example of harm.

For example, in the United States, you generally cannot sue your neighbor for setting off fireworks. There are a few exceptions, however, such as if the fireworks cause damage to your property or if they pose a danger to you or your family.

For example, you are more than deserving to take legal action if any of these happens:

– You got a body injury

– The fireworks left a negative impact on your mental health and that of the people around you.

On the other hand, if you live in a state where setting off fireworks is totally illegal, you may be able to sue your neighbor right away if they do so.

One more thing though, suing your neighbor can be a lengthy and expensive process, so you should first attempt to resolve the issue through other means such as mediation.

So, what can you do if your neighbors keep lighting off fireworks? Taking the necessary steps of course.

The first and best way is to speak with them, calm words yield better results than confrontations. Also, calling the attention of the landlord or homeowners works quite well too.

What else? You might want to deal with it and move on by getting yourself some nice soundproof equipment to keep the noise out.

The final step is to get the authorities involved, for the safety of the neighborhood, and it’s possible that you’ll have to reach out several times before they see to it.