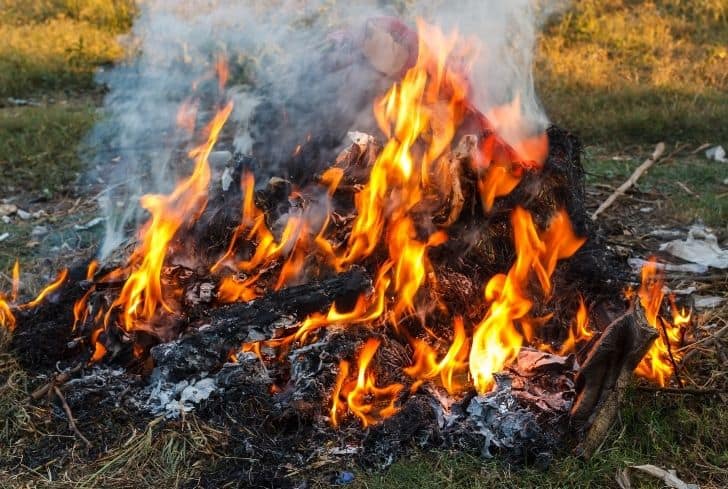 Most times, we live around people who do not know how to dispose of trash properly. But what’s more frustrating is having neighbors who prefer to burn their trash, caring less about the effect of their poor trash disposal habits on the environment.

Is your neighbor’s trash-burning habit a constant source of worry to you? Do you feel helpless because you can’t think of any possible solution to put a permanent end to this problem?

Well, you should worry less because there are tons of things you can do to fix this problem. This is because trash burning is considered an illegal practice in most states in the United States of America.

If you live in a state where trash burning is illegal, you can report your erring neighbor to the right authorities and watch him or her get fined between $75 to $300. Do this only if talking doesn’t solve the problem. In this post, we shall dive into what you can do to stop a neighbor from burning trash.

What Can I Do to Stop My Neighbors From Burning Trash?

There are many ways you can prevent your neighbors from burning their trash. The first solution to this problem is to try talking to them. However, you need to approach them calmly so you won’t make them feel rude or can’t seem to mind your business.

When talking to them, don’t forget to tell them all the reasons why burning their trash is harmful to their health and the environment. In addition, tell them other possible ways they can dispose of their trash properly.

If you think talking to them won’t solve the problem, there are other solutions you can consider. These include helping them to dispose of their trash properly. However, you should only do this if their trash consists mostly of fallen leaves and broken tree branches.

After trying any or all of the solutions discussed above and your neighbors are still burning their trash, you should take the next step to report them. Want to know how to report a neighbor burning trash? Read below.

See also  How To Keep Neighbors Vines Out of The Yard?

How to Report Neighbor Burning Trash?

There are several options to take when trying to report a neighbor of trash burning.

1. Understand the trash burning laws of your locality

Before you report that trash-burning neighbor of yours, the first step to take is to read about the trash-burning rules that exist in your local area. Trash burning, in this case, doesn’t only refer to a situation where your neighbor is burning his or her trash outside; it also includes burning trash in the fireplace.

After getting acquainted with the trash burning rules and regulations of your local area, the next step is to place a call to the local police department to report your neighbor who has been burning trash.

You can also call the fire or health department if you think the trash burning activity carried out by your neighbor is becoming more frequent. This is because frequent trash burning affects your physical environment and threatens your health and property.

This is another way you can report your trash-burning neighbor. Suppose you aren’t the only person in your locality who is disturbed by the trash-burning activities of your neighbor.

All the options discussed above and more are the various ways you can report your trash-burning neighbor. However, you should try to talk to your neighbor before reporting his or her trash-burning activities to the local authorities.

A simple discussion with your neighbor might be all you need to stop that trash-burning activity. If your neighbor remains adamant, you can report him or her using any of the various ways discussed above.

Can My Neighbor Get Fined For Burning Trash?

Most times, the punishment your neighbor can get for constantly burning trash is fine. This is because trash burning is considered illegal, and as such, a punishment must be meted out to the offender.

The fine your neighbor might be made to pay ranges from $75 to $300 depending on the number of times your neighbor has been reported for committing that offense.

Sometimes, the amount of money your neighbor will be made to pay as a fine depends on the state. Every state in the US has its laws and punishments regarding the burning of trash.

Is it Illegal to Burn trash?

If you are asking the question above, it means you don’t know if you should report your trash-burning neighbor to the appropriate authorities. You must know that trash burning frequently occurred in the United States of America a long time ago. Because there were no proper refuse disposal methods, trash burning wasn’t considered an illegal practice then.

Presently, trash burning is considered an illegal practice in most states in the United States of America. This is because many methods ensure the safe and proper disposal of trash without threatening your health or physical environment.

However, despite the many refuse disposal methods, many people still prefer to burn their trash, thereby endangering themselves, their neighbors, and their physical environment. In many cases, these people do not know that trash burning is completely illegal and harmful to their health and the environment.

However, some people carry out trash burning because it is faster and cheaper than other refuse disposal methods. Even though it is considered illegal in some states in the United States of America, other areas do not think this practice is life-threatening or a source of concern.

If you live in an area where trash burning is considered normal and your neighbor burns his or her trash frequently, there are other things you can do to salvage the situation.

The first option is to talk to your neighbor calmly while listing the dangers of trash burning and introducing him or her to other proper refuse disposal methods.

If talking doesn’t stop your neighbor from burning trash, you need to move out of the area. This is because you won’t report your neighbor since trash burning is considered normal practice in the area. Besides, unhealthy practices will threaten not only your health but your physical environment too.

How Does Burning Trash Affect the Environment?

It doesn’t matter if you are burning trash outside or in your fireplace; trash burning is bad for your physical environment. Even if your trash is a piece of paper you do not consider to be harmful, it is advised that you dispose of it properly.

When you burn trash that consists of plastic, painted, or polished wood, it will release poisonous fumes into your physical environment. These fumes are unlike the regular fumes you get exposed to occasionally. This is because they have harmful chemicals that can be deposited into the soil or your water source.

If this happens, plants in that environment will absorb the harmful chemicals and die while your water will be polluted and become unsafe for use. Besides poisonous fumes, remnants of your burnt trash can also escape and land on the soil or water, causing as many problems as the fumes.

If burning trash is capable of causing so much harm to the physical environment, why was it adopted as a refuse disposal method in the past? This question has a simple answer. The quality of trash in the past and now are not the same. T

rash that is present now consists of plastics and other objects that are treated with too many chemicals. When you burn this type of trash, toxins are released into the atmosphere regarding fumes and residue. Interestingly, these toxins land on the soil and water, causing harm to plants, humans, and animals who absorb them.

It doesn’t matter if your local area doesn’t have strict laws regarding trash burning; you must know that it is a dangerous practice that risks your health and physical environment. If you are not comfortable with your neighbor’s trash-burning activities, you have the right to complain and report to the appropriate authorities.

Besides reporting to your neighbor, there are other things you can do to stop the trash burning practice. This includes talking to your neighbor respectfully and calmly, showing your neighbor other safe methods for disposing of trash, and offering to dispose of your neighbor’s trash. If all the options discussed above don’t solve the problem, you need to move out of the environment.