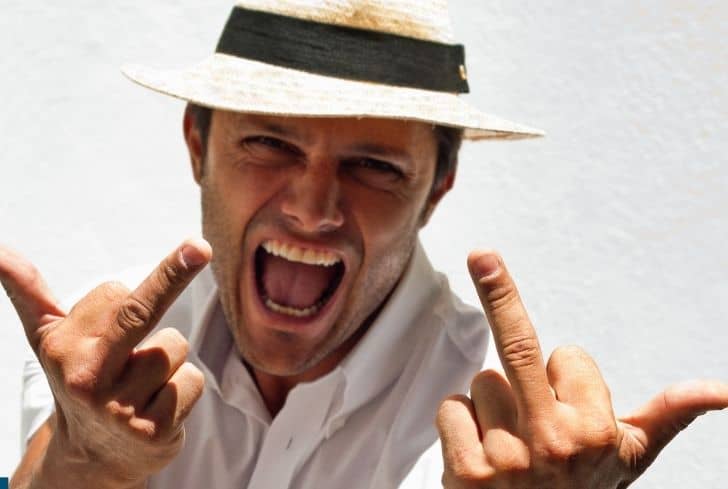 A woman reported that whenever she walks past her neighbor’s house, the neighbor flips her finger at her.

Have you ever had a similar experience with a neighbor? I’m aware it’s not entirely pleasant. Even if the other person believes they did nothing wrong, personality shapes one’s perspective.

Anger and irritation can sometimes be communicated by flipping someone off. However, it could be interpreted as a greeting by some. So, what are you going to do? If your neighbor or anyone else constantly flips you off whenever you meet.

Continue reading to find out more.

What Can I Do if My Neighbor Keeps Flipping me Off?

Here are some things you can do if your neighbor keeps flipping you off- let’s dig right in:

1. Approach your neighbor: Your next-door neighbor is flipping you off constantly. The best course of action is to approach him or her with a friendly demeanor. Keep an open mind and inquire as to why he or she is doing this.

Consider the scenario with your neighbors. For example, he or she may see it as a kind gesture rather than an insult or a nasty gesture.

3. File a complaint: Assume you’ve already spoken with your neighbor and he or she continues to yell at you anytime you pass. Then you must file a police report. It also depends on where you live.

For example, a woman reported her neighbor flipping her off to the police as disruptive behavior. The police advised the woman that they don’t do such complaints and that she should disregard the neighbor, who was protected under the first amendment.

This may be considered an obscene or disrespectful gesture in some jurisdictions, while it is permitted by the first amendment in others. So think about your neighborhood before making a complaint about a rude neighbor.

See also  The Neighbor's Yard Smells Like Dog Pee and Poop: What To Do?

Is Flipping Someone Off Disorderly Conduct?

We must acknowledge that the use of the middle finger as an insult has a lengthy, if not illustrious, the history that dates back to ancient Greece. When used to convey scorn, indignation, or dissent, it is a type of expression protected by the First Amendment, much like its vocal counterpart.

You must know what constitutes disorderly conduct in terms of particular behaviors and comments and also you must understand that it is a right to free speech.

We might not term it disorderly behavior if it does not disrupt the serenity of the place if someone flips someone off to convey his or her anger towards the person.

Not all communication is attractive, speech can be surprising and harsh at times. However, this is still a right that must be safeguarded for all citizens so that they can talk freely.

However, at a court session, if a person flipped the bird at the judge, that would almost certainly be considered contempt of court.

Is Giving Someone The Finger Harassment?

No, It is not harassment. It’s a sort of protected First Amendment speech, much like other kinds of nonverbal gestures and symbols.

In the United States, the middle finger is one of the most prevalent disrespectful gestures. Indeed, the United States Supreme Court has generally found that speech cannot be restricted only because it offends some people. The goal of criminal law is to protect people, property, and the state from serious harm.

Is it Illegal to Flip Someone Off?

No, you can flip someone off, since it’s freedom of speech but if you make it a habit, it may be counted as harassment and you can be charged for mobbing.

We all have thicker skins than to be provoked into violence because someone flipped us off. This is why, in the vast majority of circumstances, a simple bird flip will not result in a criminal charge.

Is that to say it won’t reach that point in every case? No, however, in the vast majority of circumstances, it will not be regarded as a crime.

Can You Be Arrested For Flipping Someone Off?

Depending on the circumstances, flipping the bird is usually considered an act of expressive action protected by the First Amendment, but many people find it offensive.

See also  Do Deer Eat Acorns? (Yes. They Do)

It may be legal, but it is also a poor decision, especially for the judge who will be hearing your case.

We’re not sure why you’d want to enrage the judge overseeing your case, but you should be aware that your right to free speech is limited in court due to a little thing called contempt.

Criminal contempt covers anything that offends the court’s dignity, and most judges are eager to charge it if they feel threatened, and even more so when they are insulted or ridiculed.

You could be arrested for flipping the cops the bird. However, even if there is a reasonable suspicion that someone has done so, court after court has held that raising one’s middle finger at police officers does not make one a criminal.

Remember that police officers enjoy “qualified immunity.” This means that an officer can violate your rights if they believe you are a threat to the public.

That implies that, even if your rights were infringed, the officer will most likely be let off the hook in the end.

Is it Illegal to Flip the Bird in Public?

Public space often includes roads (including the pavement), public squares, parks, and beaches. Government buildings that are open to the public, such as public libraries, are public areas to some extent.

For example, a man complained about a lady following her too closely while driving, so he flipped the bird at her to warn her off, but she yelled and threatened to call the cops.

Is the man’s action unlawful because it occurred in public?

The legal interpretation of flipping the bird by law enforcement is something you should be aware of. Police officers have issued tickets for unruly conduct and inappropriate signaling in the past.

Bear in mind that flipping someone off in public, especially on the road could be perceived as intimidating. A good rule of thumb (or finger) is to avoid any unfavorable interactions with other drivers, even if they’re completely at fault.

Can I Sue My Neighbor For Harassment?

Many people experience harassment from a neighbor, and the area outside their home becomes a battleground. Neighbor harassment is when your neighbor does something to you that is both offensive and purposeful.

See also  Can My Neighbor Hear My Cell Phone Conversations?

The behavior might vary from insulting remarks to aggression or assault in extreme circumstances. Others may overlook it, but some people require redress for their neighbor’s heinous conduct. You do not have to leave your area; you can also seek legal recourse to regulate your neighbor’s conduct.

Taking legal action against your neighbor is usually not the greatest solution because you have to live with them every day. However, If all other nice methods of dealing with harassment have failed, you should consider suing your neighbor.

What Constitutes Harassment From a Neighbor?

A neighbor can harass you based on your age, gender, sexual orientation, religion, or simply because they are malicious.

A neighbor can even harass you by spreading defamatory statements about you, perhaps ruining your reputation. If this happens, you have the right to sue your neighbor for defamation of character if the words are false.

For any tortious conduct committed against you, you may be granted damages. If you don’t want to pursue legal action, you can also demand that your neighbor apologize publicly and issue a cease and desist letter.

It’s also critical to have proof of the harassment you’re alleging. If a person has a police complaint, it is beneficial to prove that the neighbor used physical force and threatening words, which may have made him scared. This demonstrates the court of the neighbors’ practice of harassment.

In the United States, one of the most prevalent offensive gestures is the middle finger. You can talk to your neighbor if he or she keeps flipping you off and you find it offensive, however, if he or she persists, you can report it as a crime in your area.

Those who display the middle finger in public may be stopped, arrested, prosecuted, fined, and possibly imprisoned under disorderly conduct or breach of peace legislation and regulations.