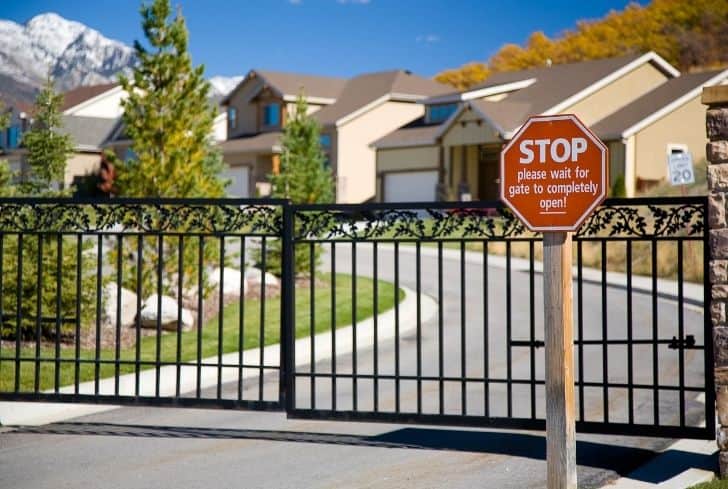 Did you know people started developing interests to live in a protected community after World War II? Yes, it did.

People’s interest to live in a well-protected and exclusive area increased after this era. And gated communities can offer such.

So, if you’re a non-resident, entering a gated community can seem like traveling to another country. Residents might act hostile towards you.

We will discuss more on gated communities in this post. You’ll know if it’s illegal to enter a gated community and more. Just keep reading!

What is a Gated Community?

The walled community is another name for a gated community. It refers to a housing estate or residential community occupied by different individuals.

Controlled entrance is one of the features that characterize gated communities. They mostly have gates, and they’re entirely fenced for security reasons. Bicycles, motorcycles, and automobiles can’t just get into a gated community.

Security personnel are always at the gate in most residential communities, while some only leave the gate locked. However, some gated communities use a combination of both security measures.

Is It Illegal To Walk Through a Gated Community?

Yes, it is. Why? Firstly, a gated community is private property. Thus, you need permission to pass through the gate since you don’t reside there. If you find the gate open and then decide to walk through, be ready to face the embarrassment that may follow.

Gated communities have trespassing laws. Therefore, you may be charged for trespassing private property by walking through the residential area without permission.

Another thing you need to know is that residents in gated communities know themselves. You may ask how, but that’s the fact. Surprisingly, these residents can tell when an unfamiliar face comes around.

You’ll know you’re not welcomed in the community when residents start giving you those scary glares. And there’s only one reasonable thing you can do at this point – leave the area as quickly as you can.

The residents might call the cops on you, which could be embarrassing. You can’t blame them for being hostile towards you. But the truth is they’re only acting that way because they want safety and don’t know if you’re a threat to them.

So, think twice before you walk through the gates of these communities since you’re not a guest.

See also  Do You Need a Permit For a French Drain?

Well, the answer goes both ways. That’s a yes and a no. Let’s focus on the condition under which police cannot enter a gated community.

Everyone knows traffic violation is a severe offense in the United States of America. The traffic police are ready to give offenders a hot chase into any hiding. But privately-owned roads make the job difficult for officers.

Traffic officers cannot punish traffic violators on private roads without permission from property owners. But they don’t require any permission on public roads, which belongs to the government.

So, when someone runs the traffic sign, speeds, or drives a vehicle without a headlight on these private roads, the police cannot punish them. It’s the responsibility of the property owners to use legal means to authorize the police to punish traffic offenders in the community.

However, every road in the United States must comply with the standard set by the state. On that note, if someone is driving under the influence (alcohol or drugs), the police have the right to launch an investigation. Thus, they can enter a gated community, if need be.

Now, when can the police enter a gated community without an authorization? Both the police and firefighters can gain access during emergencies. It would not be ideal for them to wait for authorization in a life or death situation.

Firefighters or the police are sometimes given keys to gated communities they serve. Most facilities also offer access code lockboxes or unique keys, which police officers or firefighters can use to gain access into the community.

What if every attempt to get access into a gated community fails during an emergency? Then the police or firefighters may result in using forceful techniques.

Yes, a gated community is considered private property. That’s why you can’t just walk in through the gate without permission. Even if you successfully get past security, the resident’s hostility towards you could be scary.

The reason people choose to reside in gated communities is because of the security. They want their families and everything they own to be safe. Otherwise, they would have decided to remain in public residential areas.

Because gated communities are private property, trespassing should be something people should desist from doing. Residents are not afraid to speak up in these communities, as they’re urged to do so. So, don’t be surprised when the police show up and start harassing you.

No, they are not. Why? The law states that private citizens don’t have the authority to block public roads. Thus, if the roads in a gated community are public, then the gate has to be left wide open.

It would even be an offense to install a gate on a public road. So, the roads in gated communities must be private. Otherwise, the gates won’t be under lock and key now and then. However, the exclusivity, privacy, and security residents enjoy would be in jeopardy, if this were the case.

So, the roads on every street in a gated community are private. That’s why the police cannot ticket traffic violators in the community. It can only happen when the residents go through the legal process to empower the police.

It’s also important to know that a city can sell public streets to interested buyers by following specific procedures. But once the streets are sold off, they automatically become private properties.

In this case, the city’s authority over the roads would become limited. The city would no longer have the power to enforce traffic laws within the gated community since the roads have become private.

Furthermore, public funds will no longer be used to maintain the roads or fund trash collection. Those financial responsibilities would automatically fall on the residents.

Can You Enter a Gated Community Legally?

Yes, you can. By the way, residents of these communities are humans. The reason for the controlled entrances into gated communities is to ensure the safety of the residents.

Residents hire and pay private securities handsomely. The aim is to ensure criminal elements are prevented from entering the community. So, the security personnel at the gated community have a right to prevent unapproved visitors from passing through the gate.

However, the legal way to enter a gated community is by having an access code (usually given to emergency responders) or being on the guest list. A resident expecting you as a guest have to submit your name to the security guards for approval.

Most communities allow residents to have an “always welcome” list. Visitors in these lists don’t need approval to pass through the gate. They can move in and out of the gated community whenever they please.

So, these are the only ways you can enter a gated community legally. Don’t even think of telling lies. The security guards managing the security affairs of these communities are pretty strict. They won’t grant you access unless they have permission from a resident and your name is on the guest list.

How Do Amazon And UPS Get Into a Gated Community?

Let’s start with UPS. Let it be known that UPS would only attempt delivering a package to a gated community address three times. If the driver doesn’t find any guard on duty to let the vehicle in, a UPS InfoNotice would be left in a visible area for the package owner.

Once that is done, it’s now left for the package owner to get hold of the UPS InfoNotice. Please follow the instructions provided to make proper arrangements for prompt and secure package delivery when you do.

If there’s a guard available to open the gate, the UPS driver will get your package to your doorstep.

Now, let’s discuss how Amazon gets into gated communities. The driver must get the package to your home, but you still have a significant role to play. Gated communities have a reputation for controlled entrances.

So, alert the security guards beforehand if you want things to be easier when the Amazon driver lands on the gate. Provide the company’s name and expected delivery time beforehand.

On the flip side, if there’s a call box, endeavor to provide the delivery driver with your code.

Excitingly, Amazon has begun a new initiative to make delivering packages to customers in gated communities a breeze. It’s known as “Key for Business.” Here is how it works.

An Amazon delivery driver on getting to the gated community would request access to the gate. Then Amazon would ensure the gate is unlocked after confirming the driver’s route, ID, delivery time, and GPS location.

Is It Illegal To Walk Through A Gated Community? Yes, it is. They could harass and embarrass you for such an act. Remember that these communities are private residential areas. Thus, residents have the right to call the private security in the area or the police on them.

No one would dare to harass you in a gated community when you entered legally. But that doesn’t mean you now have the authority to walk into other residents’ backyards. We shared other information about gated communities in this post that should be of value to anyone. Thank you for reading.