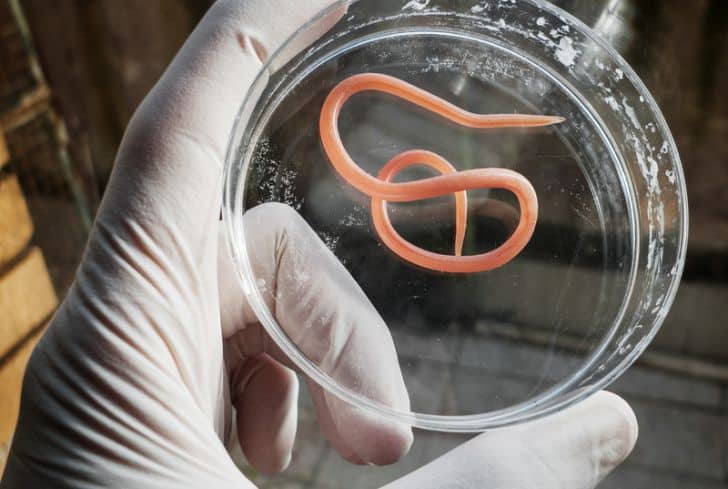 The destruction of a lovely garden by nematodes can be very upsetting. The spread of these parasites from infected plants to other plants is difficult to prevent. There are, however, various ways to kill or deter nematodes from damaging your garden. Pyrethrin has been mentioned as one of the methods. However, does pyrethrin kill nematodes?

What is Pyrethrin Spray?

Pyrethrin spray is an insecticide made from the dried flower heads of chrysanthemums. Please keep in mind that pyrethrin is a more refined extract of pyrethrum. The chrysanthemum flower is often called a painted daisy or pyrethrum daisy.

The pyrethrin spray contains six toxins extracted and diluted from the flower. Typically, the spray targets an insect’s nervous system. When it is not combined with other dangerous synthetic substances, it is considered an organic insecticide.

Although the spray was initially licensed as a pesticide in the 1950s, it has been used since the early 1900s. The Pyrethrin spray is available as a concentrate that must be diluted using a hand sprayer, a sprinkler can, or a low-pressure sprayer before use.

Read the label of the pyrethrin spray you intend to use because some call for adding neem oil or soap to make it more potent. To prevent harming pollinators like bees, you can spray the mixture directly onto the diseased plants, avoiding the flower heads and buds.

Even when using an organic version of pyrethrin, it is advisable to spray your plants while wearing protective clothing. The spray is harmful to individuals when used in large quantities. If you take precautions to avoid exposure, you and other warm-blooded mammals won’t be harmed by the small amounts you spray.

On contact, pyrethrin kills nematodes. A nematode’s nervous system is inflamed when it eats or comes in contact with a pesticide that contains pyrethrin, which causes paralysis and eventually death. Not all nematodes will, however, die instantly.

The nematode won’t die if the digestive system’s enzymes can detoxify the pyrethrin. If it can’t, the nematode dies. Pyrethrin is frequently used with a synergist to increase its nematode-killing power.

Currently, pyrethrins can be found in several pesticides used in and around plants and buildings. Additionally, they are in anti-head-lice products.

Most gardeners love pyrethrin because it works so well against most insects. The following are some of the benefits of the spray:

Yes, pyrethrin exposure causes the worm’s internal structures to break down more quickly, resulting in death. The effect on the worms depends on the concentration of pyrethrin used and how long it takes for them to burrow in the soil. The worms take longer to burrow in areas where pyrethrin is applied in high concentrations. They’ll move more slowly and produce less effectively.

The duration of the exposure is significant as well.  Worms exposed for a more extended period burrowed more slowly.

In extreme cases, pyrethrin is believed to remain in soil and water for up to 17 days. As a result, there is a very high chance that the worms will come into contact with pyrethrin.

The most widely used pesticide, nematicide, is capable of killing nematodes. The nematicide’s components either kill nematodes or have harmful effects on them. They prevent the nematodes from being able to attack the host plants by delaying their egg-hatching or interfering with their mobility. Fumigant nematicides and non-fumigants are the two categories into which nematicides are often divided.

Toxic substances known as fumigant pesticides are used to control plant parasitic nematodes. The fumigants will reach the nematodes in a gaseous state that penetrates through the porous soil and are also effective against soil-borne pests.

Most farmers use fumigant nematicides to minimize the loss of high-value crops like vegetables by plant-parasitic nematodes. Paladin, vapam, Telone II, and dominus are some of the readily available fumigant insecticides.

These harmful non-volatile compounds reduce nematode populations while safeguarding crops from harm. The non-fumigant insecticides are sprayed, drip-irrigated, or soaked into the soil before, during, or after planting.

Contact and systemic insecticides are both non-fumigant. As the nematodes eat the plant roots and come into direct touch with humans, systemic will kill the nematodes. Mocap, Salibro, Vydate, Nimitz, and velum prime are a few examples of non-fumigant nematicides.

What Does Pyrethrin Kill?

Many insects, both flying and crawling, such as aphids, mosquitoes, leafhoppers, and moths, are killed by pyrethrin. Additionally, pyrethrin is present in body lice treatments such as licetro, Barc, Pronto, and Tisit. Pyrethrins quickly eliminate mite plants.

As a result of its extreme toxicity, it also kills beneficial insects that are well-known for pest control or pollination. Pests, in this case, are insects that hinder the growth of plants.

Pyrethrin is combined with the hazardous non-organic chemical Piperonyl butoxide (PBO) to increase its effectiveness. The addition is done because pyrethrin does not have adequate power on its own, and if the dosage is not high enough, some insects can survive. Insecticidal soap or neem oil are preferable choices if you opt for an organic product.

Although most people think pyrethrin is less toxic, it is poisonous enough to harm fish and amphibians. Therefore, pyrethrin should not be used near drainage systems or rivers.

How Long Do Nematodes Live on the Ground?

Nematodes usually last in the soil for up to 18 months. However, a few factors will determine how long they can survive underground.

How Do You Deter Nematodes?

Nematodes can cause a massive loss in your garden, especially if you’ve planted vegetables. The root-knot nematode, one type of nematode, typically pierces the root of particular plants and lays its eggs there. The plant then seems wilted or stunted because of the “knotty” appearance of the roots. You must eliminate the nematodes before they reach the plants to avoid all of this.

See also  Do Aphids Drown in Water? (or Do They Survive?)

Here are some tips for keeping nematodes away from your vegetables:

What To Use To Kill Nematodes?

There are other ways of killing nematodes besides pyrethrin and nematicides. Given that these two are harmful and may not be easily accessible to most people, most gardeners are reluctant to use them.

That does not imply that you must abandon your lovely garden because of nematodes. Here are three solutions to your nematode problem:

A practical, non-toxic method of controlling nematodes is using plants. Several nematode-repellent plants can kill nematodes; however, the majority just serve to repel them. Nematodes can be killed by French marigolds, painted daisies, showy Crotalaria, and caster beans, especially when combined with green manure.

Chitin is expensive to buy but has a history of killing nematodes. Shrimp, crab, nematode tough eggshells, particular fungus, and insect exoskeletons have chitin in their shells. Chitin’s purpose is to increase the number of beneficial soil microbes that eat root-knot nematodes.

Pyrethrin can be used to kill nematodes. But despite all of its benefits, you should think again about its bad effects. Pyrethrin might not be the best choice because there are other more effective natural ways to kill nematodes.

You may want to consider using various nematode-repelling techniques in your garden so you won’t have to kill beneficial nematodes. The methods include crop rotation, fallowing, soil solarization, and plant variation.