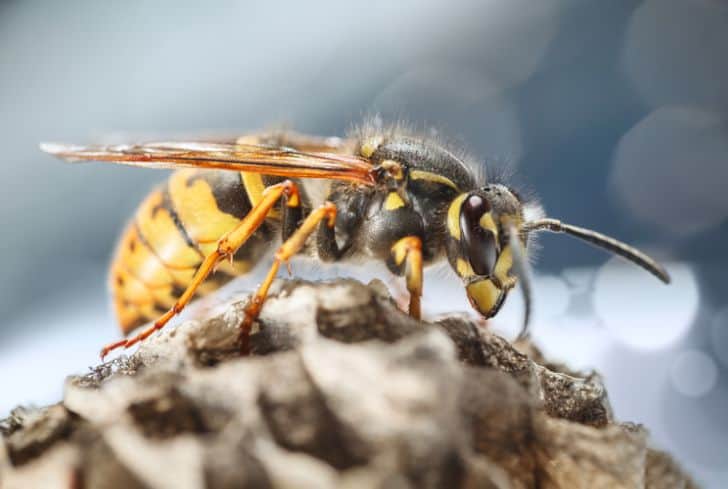 It’s frightening to have wasps swarming around your home, especially if you’ve ever been stung by one. However, you should keep in mind that a wasp will only sting you if it considers you to be a threat.

Killing a wasp that hasn’t attacked you will harm you more. To defend itself, a wasp will sting. It will sting you the more you swat at it. If you manage to kill it, you should get out of there as soon as possible.

A wasp will release a pheromone, a chemical that warns other wasps to be alert. You’ll have swarms of wasps ready to attack sooner than you think. It’s impossible to kill a large swarm of wasps, and they’ll hurt you.

Does Killing a Wasp Attract More?

When a wasp is attacked, it emits a pheromone chemical that signals for help. Wasps will repeatedly sting because their stinger remains intact after each sting. Other wasps may come to its aid.

However, the pheromone released by a dying wasp is stronger. It instantly put the other wasps on alert, and they become aggressive.

Should You Kill Wasps?

Even though it may appear that killing wasps is a good idea, keep in mind that they play an important role in the ecosystem. However, most people blame them for ruining their picnics and inflicting unpleasant stings.

Wasps may not be as well-loved as their cousins, the bees, but they play an equally crucial part in the ecosystem. We should also be concerned about their extinction.

Here are some reasons why you should not kill wasps:

Tell your friends about the benefits of wasps once you’ve learned about them. It would be good if we became more aware of the importance of wasp protection.

What Happens If You Kill a Wasp in Your House?

Unless there is a nest nearby, killing one wasp in your house should not be a big deal. When wasps feel threatened, they attack. When you kill a wasp, and it releases a pheromone, the other wasps will only attack if they are nearby and still see you as a threat.

How close the wasp’s nest is to your home and whether the others can get inside is what matters. The others will attack you if the nest is inside your home. More than anything else, they’re trying to protect their nest.

There may not be much reaction if the nest is far away and the wasp you accidentally killed strayed into your home. Knowing whether the wasp is a solitary or a social wasp will help you determine the reaction you should expect.

Do Wasps Attack If You Kill One?

Individual wasps killed away from the nest aren’t given much thought by wasps. They will not become defensive unless they believe you intrude on their personal space. If you attack their nest, it will be fiercely defended.

The fear of wasps causes most humans to respond quickly and, in most cases, kill the wasp. Given how painful their stings are, it’s understandable. On the other hand, others are afraid of killing one because they are afraid of being attacked by other wasps.

When you kill one wasp, the other wasps may or may not attack you. You’re lucky if the wasp was solitary and there was no nest nearby. Unfortunately, if you kill one wasp and they send out an alert, and the nest is close by, you are likely to be attacked.

How Long Does Wasp Pheromone Last?

Wasps use pheromone as a silent means of alerting their friends that an enemy is nearby. Sweat or oil are the most common forms of pheromone emission. Other wasps will attack the aggressor in response to this chemical.

Wasp pheromone has a 24-hour lifespan and is released by wasps when their nest is attacked in the hopes of rallying the other wasps to return and defend the nest. A dead wasp can also emit the pheromone to warn other wasps that an enemy is nearby by releasing the pheromone.

How To Get Rid of Wasps Without Killing Them?

Wasps are best avoided or ignored at all times. However, this may not always be possible, especially if your home is infested. A wasp-infested home is not a safe or comfortable place to live.

It is not always necessary to kill them. Other, more humane methods of keeping wasps away from your home exist. Calling an exterminator will kill the wasps.

Let’s look at a few different ways to get rid of wasps without killing them.

Why not relocate the wasps’ nest far away from your home instead of killing them? Relocating wasp’s nests is not a task for the faint of heart, and it is best left to the professionals. Before calling an exterminator, you must first find a safe location away from your home to place the nest.

Wasps may not understand you’re attempting to relocate them out of harm’s way and may attack you instead. Because you are unfamiliar with wasp behavior, you may not know when the best time is to relocate them, and the wasps will attack you.

If you insist on doing it yourself, make sure you do it at night, when they are the least active. Place the nest inside a large plastic bowl and cover it with a plastic sheet.  Place the bowl with the nest in your desired location and remove the plastic materials after one hour.

When killing wasps using homemade repellents, you must know which ones to use because not all of them will work. Olive and peppermint oils are the best since they have an odor that wasps despise.

Put a teaspoon of olive oil and a few drops of peppermint oil in a spray bottle. After adding half a cup of water, stir thoroughly. Spray around the wasps’ hive or the area where they frequent.

You can also use vinegar or essential oils to get rid of the wasps.

Wasps are possessive about their space and don’t get along with other wasp colonies. They are defensive with the place they occupy and can’t tolerate neighbors. They will not put a nest where another wasp colony has occupied. You can take advantage of this fact and put a Wasp Nest Decoy to prevent them from building a nest in the first place.

Even if the wasps already have a nest, you can use the wasp nest decoy. Their envious nature will cause them to flee the area and leave the new colony. If you try to place the decoy too close to the current one, you’ll be attacked by angry wasps.

To avoid getting wet, wasps always try to build their nests in dry areas. If the wasps’ nest becomes damp, they will abandon it and build a new dry one. Wasps hate water.

Why not try something different and spray plain water over the wasp’s nest? You can use a hose to create a rain-like effect. To avoid being stung by furious wasps, do this from a safe distance.

Wasps tend to cause a lot of fear if you see them hovering around. You’ll swat it quickly in the hopes of killing it before it stings you. However, you may not realize that you are declaring war on a colony by killing the wasp.

The vast majority of people have always wondered what would happen if they accidentally killed a wasp. We’ve gone over the consequences of killing a wasp in great detail. You’ve also learned what causes the other wasps to react when one of their own is killed.

However, because coexisting with wasps may not be ideal for you, we’ve given you several options for removing wasps without killing them. Repellents, relocation, drenching their nest with plain water, and decoys are all effective ways you can keep wasps away.