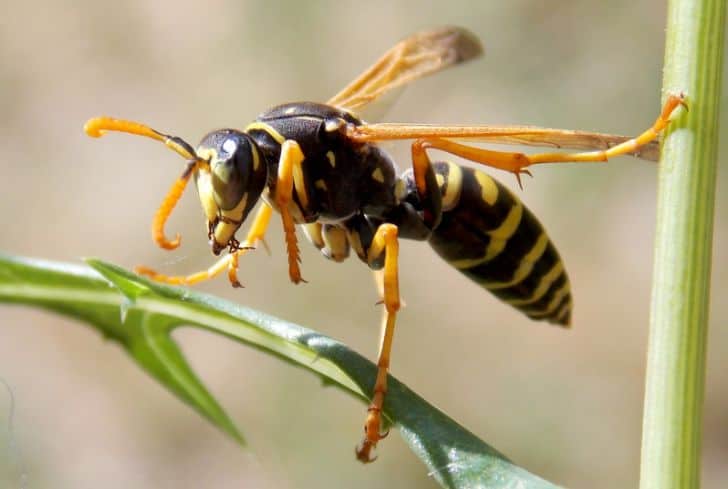 While many people fear wasps, many others underestimate how dangerous these tiny insects can be. Only those who have been stung by a wasp can understand the pain. Picture a wasp stinging a squirrel; is a wasp capable of killing a squirrel?

While a single wasp sting will cause pain to a squirrel, the squirrel is unlikely to die due to the sting. However, a squirrel will not survive multiple wasp stings. Unlike bees, which sting once and die, wasps sting numerous times.

It’s worth noting that wasps will only attack to defend themselves or their nest. A squirrel should expect an attack if it comes close to the wasp’s territory.

Wasp stings are pretty harmful. Multiple wasp stings can kill a squirrel. When a squirrel gets stung in the mouth or neck by a wasp, it can go into anaphylactic shock and die.

Unlike a pet you can identify and send to the vet for treatment, a squirrel will scurry away. Stings to the head, mouth, neck, and face can cause difficulty and inability to breathe.

Squirrels, just like humans, can develop severe reactions to wasp stings. One sting can cause a severe allergic reaction if the squirrel is allergic to Hymenoptera. However, for the squirrel that doesn’t react to a single wasp sting, multiple wasp stings will cause toxicity.

What are Wasps Afraid of?

Wasps, as feared as they are, have their own set of fears. Let’s look at what wasps are afraid of:

There are around 24 bird species that love eating wasps. Any bird that regularly consumes bugs will also enjoy eating wasps. As a result, birds like magpies, blackbirds, and starlings will intentionally catch wasps.

Other birds that eat wasps are wrens, sparrows, woodpeckers, bluebirds, warblers, common nighthawks, and orioles. The birds usually attack a solitary wasp to avoid angering a swarm of wasps.

Wasps also have predators from the insect family. Wasps are eaten by dragonflies, beetles, moths, praying mantis, centipedes, hoverflies, and robber flies, among other insects.

Some larger wasps will eat smaller and younger wasps as well. Spiders will also not spare wasps once they catch them. However, spiders are not insects but arachnids.

See also  Will Baking Soda Kill Lizards? (And What Keep It Away?)

Some reptiles and amphibians are not terrified of wasp stings and will eat them anyway. Salamanders, toads, lizards, frogs, and turtles will eat wasps occasionally.

For most of them, wasps are not their main meal, but they will occasionally have it as a snack should they come across one.

Other predators prey on wasps, but they do not fit within the three groups discussed. The majority of these predators, on the other hand, are more interested in the larvae than the adult wasp. Only bats are brave enough to prey on an adult.

Badgers, skunks, wolverines, weasels, mice, rats, and raccoons are among the animals that will occasionally attack a wasps nest to eat the larvae. In various places of the world, humans eat wasp larvae.

Squirrels are omnivorous, meaning they can eat both plants and animals. They are mostly looking for fungus, nuts, seeds, and other similar stuff. They will, however, seek out other alternatives such as insects, birds, and small animals.

Wasps can be a serious threat to you, your family, and your pets. Using a pesticide is the easiest and most effective way to get rid of them. But there are a few things you should know before reaching for that wasp spray.

Wasp spray is poisonous and toxic to humans and animals. When sprayed on squirrels, it can be fatal. Most bug sprays have active components called pyrethroids, which kill insects quickly.

Pyrethroid has severe effects on animals and humans. They affect nerve signaling, causing abnormal sensations and, in the worst-case scenario, seizures or paralysis. Follow these steps to keep squirrels away from your home without killing them.

Wasps will sting anything that provokes them. The wasp will only sting the bird if there is a conflict. Due to its protective feathers, a single wasp sting may not cause much harm to a bird, but a swarm can be fatal. Wasps will only sting birds to defend themselves and their nests.

Wasps will scavenge for alternate foods when there isn’t enough food, especially leftover foods, juices, fruits, and bird feeders. The wasp will sting a bird to take the food on the bird feeder.

Birds may come close to a wasps nest when searching for food, whether by accident or purpose. A wasp will sting the bird while also releasing a pheromone to notify the other wasps of the intruder’s presence to guard their nest.

When a large swarm of wasps attacks a single bird and stings it repeatedly, the bird dies. Even though birds have strong wings and can escape swiftly, wasps can overpower them.

Yes, a species that is scientifically known as the samurai wasp. Samurai wasps are native to Asia, but they have spread throughout the globe. They lay their eggs within the stink bug eggs and hatch as adult wasps, killing the developing nymphs.

The stink bug is a tiny insect with two long antennae and a shield-shaped body. They’re typically 1.7 centimeters long and about as wide. Fruits and vegetables are the primary food sources for stink bugs.

Because the Samurai wasp is so tiny, it can lay its eggs inside the stink bug’s eggs. The wasp larvae feed on the stink bug larvae and destroy them. An adult wasp will emerge from each affected stink bug egg.

In most states where stink bugs have invaded, researchers are keen on using the samurai wasp to control the bugs. The samurai wasps do not sting people; hence no need to worry about the researchers’ intent. They are so tiny that rarely will you be able to see them.

The stink bug’s eggs are well hidden in tree canopies, barks, or crops, and the samurai wasps search them down. These eggs are very hard to see with the naked eye. On the other hand, the wasps can see the eggs and will parasitize them by laying their eggs inside them.

See also  Are Roaches Attracted To Urine? (And What Attracts Them?)

How To Keep Wasps Away From Home?

Wasps flying around your home can be pretty scary, especially if you have children or pets. The best way to deal with a full infestation is to hire a professional pest controller.

There are, however, various methods for keeping wasps away from your home before they become an infestation. Here are a few possible solutions:

Soap and water are the cheapest and most readily available—mix two tablespoons of dish soap with water in a spray bottle. You can use the mixture to spray the low-hanging nest. To avoid being stung, do it when the wasps are inactive.

The soap’s job is to clog the wasps’ spiracles, preventing them from breathing and ultimately killing them.

You can easily make a wasp trap by placing some sweet treats in a container to attract the wasps. They will be trapped once inside the container. The simplest method is to cut a small hole in a two-liter bottle.

Alternatively, you can buy TrapStik for Wasps on Amazon. It’s best to keep the wasp trap close to the nest.

If wasps can find food, they will come to your house. Uncovered foods and trash provide food for the wasps. Wasps love sweets and proteins, so keep anything sugary away. Trash will be found where recycling bins, compost food matter, and exposed garbage are.

Keep your garbage containers sealed to keep wasps away. You can use bungee cords for those lids that cannot close correctly. It will be easier to keep track of your waste bins if you compost indoors.

Planting wasp-repellent plants around your home is another strategy to keep wasps away. Some plant species that repel wasps include citronella, eucalyptus, thyme, wormwood, and spearmint.

Plant flowering plants like pennyroyals, marigolds, and geraniums to beautify your compound while also repelling wasps. Plant them in areas where wasps are regularly observed.

You should avoid some plants because they attract rather than repel wasps. Sweet fennel, yarrow, and Queen Anne’s lace should all be avoided.

Wasps are extremely dangerous, and any animal that provokes them will be stung and possibly killed. A squirrel is no exception either. A single sting is only lethal when there is a severe allergic reaction. Multiple stings are what is lethal.

Wasps can harm a variety of animals and insects, including squirrels. Wasps, on the other hand, are preyed upon by birds, reptiles, insects, and amphibians, among other predators.