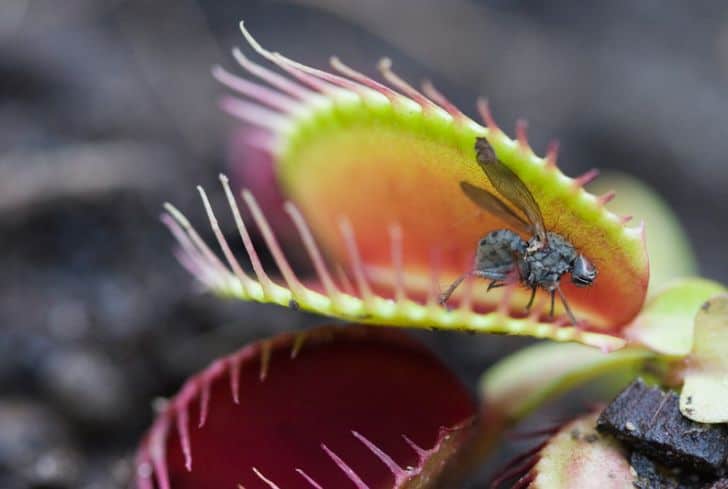 Venus fly traps (Dionaea muscipula) are carnivorous plants that eat insects and other small creatures. They may catch various insects after luring them in with their sweet nectar. Hairs on the Venus fly trap send an electric current when something touches it. It closes the trap, trapping the insect inside.

The Venus flytrap uses its digestive system to break down the insect’s delicate tissues once caught. The Venus flytrap will open its trap after a week, ready to catch another insect. But, as we’ll see, is the Venus flytrap capable of trapping all insects, including ladybugs?

If anything causes a Venus flytrap to close its trap, it will do so. Any unfortunate insect that lands on the trap will be caught and eaten. Venus fly traps can consume ladybugs though they do not make an ideal food for them.

Ladybugs have a strong, protective shell or exoskeleton protecting their bodies, which is one of the reasons. The Venus flytrap has a hard time digesting the shell. The longer the dead ladybug’s body remains in the trap, the greater the chance of bacterial development. Bacteria cause infection, which is harmful to the plant.

Ladybugs’ knee joints release a foul-smelling type of uric acid as a defense mechanism. The ladybug’s acid will seriously affect the Venus flytrap, causing it to die.

Can Venus Flytraps Eat Any Bug?

Disregard the term flytrap and focus on the fact that the Venus flytrap can consume a wide range of insects. The plant can eat spiders, gnats, caterpillars, crickets, beetles, worms, ants, flies, mosquitoes, and slugs.

What matters is the bug’s size. The bug shouldn’t be so big that it can’t fit in the trap, nor should it be so small that it can get escape.

Because Venus flytraps cannot extract nutrients from the soil, they collect and eat insects to supplement their diet. The plants grow on nutrient-depleted soil, which explains their predatory nature.

What Do Venus Fly Traps Eat?

Venus fly traps are primarily carnivorous and prefer crawling insects. They’ll eat any bug that gets caught as long as it’s the proper size and has enough struggle to stimulate feeding. However, they let tiny insects go since digesting them takes too much energy.

They also dislike giant insects, such as the earthworm, since they prefer insects that are easier to catch. The Venus flytrap has evolved a system that allows it to distinguish between non-consumables such as leaves and raindrops from edibles such as bugs.

Here are some of the Venus fly trap’s preferred foods:

While Venus fly traps can consume dead bugs, you must assist them. It will be necessary to stimulate the tiny hairs inside the trap’s mouth for them to close. Dead bugs cannot be able to stimulate such kind of reaction.

Only until they are confident that what they have trapped is food will the traps closed. When a living insect is trapped inside the trap’s mouth, it will struggle, which will cause the trap to close.

If you’re going to feed a dead bug to a Venus fly trap, make sure it’s about a third of the trap’s size. Place the dead bug inside the trap with tweezers, gently rubbing it against the hairs.

Because the trap shuts in stages, wait until it’s almost closed completely before gently encouraging it to close with your tweezers or fingertips. Squeeze for around 30 seconds without squeezing too hard.

Because it is a carnivorous plant, Venus fly traps cannot consume fruits. Small invertebrates, insects, and arachnids make up most of its diet. Fruits are high in sugars that the plant is unable to digest. The flytrap will decompose and perish if the sugars remain in the traps.

Apart from eating insects and other small creatures, the Venus flytrap lacks enzymes that enable it to digest a wide range of foods. The plant has evolved to catch insects that provide nitrogen for the plant’s leaves. They aren’t set up to handle fruits.

Can You Feed Venus Flytrap Ants?

Yes, you can feed your Venus flytrap with ants. Ants make up most of the Venus flytrap’s diet in its natural habitat. Ants are small enough to fit within the trap and are nutrient-rich. They also move in colonies, so if a Venus fly trap captures one colony, it will have enough food and nutrition to endure a long time.

If you keep your Venus flytrap outside, you won’t have to worry about feeding it ants. It will release nectar, a delicious aroma that will attract ants immediately.

See also  Will Eucalyptus Oil Kill Bed Bugs? (How To Use it?)

If your Venus flytrap is indoors, you will have to feed it with ants strategically, or the ants will escape. Place the ant in the correct place with tweezers and close the trap by touching the plant’s trigger hairs twice.

To avoid the ant having enough time to escape, ensure the ant is in the trap’s center.

What is the Lifespan of a Venus Flytrap?

The plant has a 20-year lifespan, while the individual traps have a much shorter lifespan. The Venus flytrap trap can only shut down five times before it turns black and dies.

The Venus flytrap plant can produce new plants, extending the plant’s lifespan. A Venus flytrap’s root will extend into the soil to form a bulb that will grow into a new plant.

Venus flytrap plants grow at their fastest in the summer, slow down in the autumn, and go dormant in the winter.

Although catching mosquitoes is difficult for Venus flytraps, they are capable of eating them. Mosquitoes are too few to activate the Venus flytrap’s hairs twice, despite the trap’s sensitive hair.

The Venus flytrap attracts mosquitoes, particularly male mosquitoes, because of the tasty nectar it generates.

The mosquitos’ bodies are too small to cause a reaction that would cause the trap to close; thus, they can quickly fly through it. You can, however, feed the plant dead mosquitoes, which is also perfectly all right.

What Can You Not Feed Venus Flytraps?

Venus flytraps do not need to consume insects, but they will lack the nutrients they need for growth. We’ve talked about the ideal insects for these plants a lot in this article.

Let us now learn that the Venus flytrap should not be fed.

See also  Does Denorex Kill Lice? (And How To Use it?)

When caring for your Venus flytrap plant, you should be cautious. When you feed a Venus flytrap, the leaves will sometimes turn black. This condition can be caused by incorrectly feeding the plant, but there are a variety of other causes. If you want to avoid the black leaves, read here.

If a stray moth can’t get away from the plant’s trap, it becomes a meal. The size of the moth will determine whether or not feeding on it is suitable for the Venus flytrap.

It’s okay if the moth is small enough to fit within the flytrap and its lobe seals entirely. However, the leaf will die if the moth does not fit properly.

Unfortunately, the sweet nectar released by the flytrap is what attracts the moths, both large and small. When it’s too late, the flytrap may realize that the moth is too huge to fit. If you decide to feed the plant with moths, ensure it’s not more than a third of the plant.

How Can I Care For My Venus Flytrap?

If the prospect of growing your own Venus flytrap has sparked your interest, you should know a few things. Although the plant is delicate, it is pretty simple to care for. Here are some basic guidelines to follow:

It’s helpful to know that Venus flytraps eat a wide variety of insect foods. Because the plant is rapidly becoming extinct, it would be good if many individuals choose to grow them in their homes. After all, they’re simple to look after.