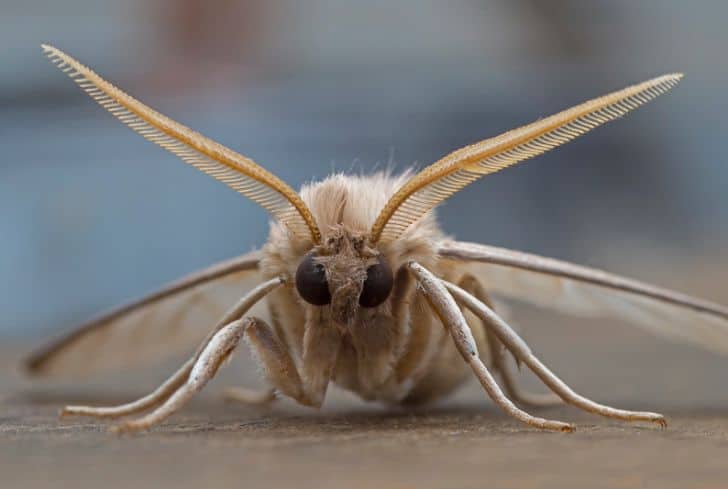 You might spot moths in your garden and wonder if they are the ones destroying leaves or making your garden look pale. But you will be surprised that these insects are harmless, with some even missing a mouth. Though, how can you tell if, indeed, they have mouths? Well, you will find out in a short while.

Nowadays, moths come in several species—some with and some without mouths. So, you might wonder which species have mouths and which don’t. This article looks at five different moth species (Luna moth, silk, Atlas, Gypsy, and Rosy Maple moths) and their special characteristics.

Read: Do Moths Have Teeth?

Please continue to read to understand more about them.

Do Luna Moths have Mouths?

No! Luna Moths do not have mouths. In fact, these moth species do not have digestive systems. Luna moths usually hatch into caterpillars after a week or ten days. These caterpillars will feed on leaves and plant nutrients until they are ready to transition to the next stage.

Note that a female Luna moth lays between 200 and 400 eggs once or twice a year (depending on the climate). Over again, the caterpillar stage of Luna moths is destructive. They will feed on walnut, hickory, persimmon, birch, and sweet gum leaves for about four weeks before spinning and weaving a paper-thin silk brown cocoon and metamorphosing as a pupa before changing into an adult Luna moths living a maximum of 10 days.

Luna moths are also among the largest species in North America and a few parts of Florida, South Carolina, and Saskatchewan. So, you can quickly identify a Luna moth by its physical attributes, like the light green four broad wings (4-5 inches) with distinctive eye spots and a long curving tail tip. Nonetheless, they are usually active at night.

Check out this video to understand more about this specie’s metamorphosis.

Do Silk Moths have Mouths?

Like most other moths, silk moths do not have functioning mouth parts to feed or drink. These moths will also live for about a week or ten days. Others, however, live longer (like 13 days). They are also harmless, even at the caterpillar stage.

See also  Do Moths Have Teeth (And Can They Bite You?)

The primary function of adult silk moths is to mate within that short period, just like the other many moths.

What is also amazing about silk moths is that they eat enough food to sustain them during the transition from the caterpillar to the adult stage. Typically, they feed on mulberry leaves for about three to four weeks (to sustain them inside the cocoon and their remaining time as adults).

Ordinarily, silk moth larvae will weave an enormous cocoon onto a leaf’s branch using its special raw silk and hibernate for a few days until it is ready to transition to the next stage. However, it can be difficult to spot a giant wild silk moth flying in your backyard in summer because these moths normally sleep all day and are active at night looking for potential mates.

Do Atlas Moths have Mouths?

Atlas moths are native to Southeast Asia (India, Malaysia, Indonesia, and China). Moreover, they are nocturnal insects active at night, looking for potential mates. The main purpose of the adult Atlas moth is to find a mate and fertilize the eggs.

Female Atlas moths produce around 200 to 300 eggs on the underside of their favorite evergreen tree leaves. The eggs then hatch into caterpillars after roughly five or so days. The caterpillars feed on citrus fruit leaves, guava, cinnamon, willow, Jamaican cherry, and other evergreen leaves.

Atlas moths will solemnly rely on the food and nutrients stored during the caterpillar stage. The food will be enough for them to survive the few remaining days.

The wings of the Atlas moths are brightly multicolored (copper to reddish-brown with white, black, and purple lines), and you can spot them between November and January in Southeast Asia if you are lucky.

See also  Do Mice Eat Snails and Slugs? (Is it Safe For Them?)

Do Gypsy Moths have Mouths?

No. Gypsy moths do not have mouths. These colorful moths will only depend on the food they eat during their larvae stage, just like most other moth species. In addition, they will make sure to eat enough leaves and tree sap to last their short lives.

If you are keen enough, you might notice that Gypsy moths emerge from their cocoon after 10 to 14 days. The female gypsy moths will lay between 500 and 1,000 eggs; this is enough to ensure continuity of the generation because insectivorous plants and other wild animals & birds usually feed on them.

The caterpillar stage of gypsy moths usually lasts about seven weeks. During these seven weeks, they will devour enough food with nutrients from most deciduous trees or conifers to sustain them through the pupa and adult stages.

Gypsy moths produce one generation in a year.

Do Rosy Maple Moths have Mouths?

Adult Rosy Maple moths do not have mouths. However, they will have already eaten enough nutrients from maple and oak trees during their larvae stage. You can spot Rosy Maple moths by their neon pink and yellow appearance along the temperate deciduous forests of North America and Canada.

Compared to other moths discussed here, the Rosy Maple moths are not as large as you might think. Also, adult female Rosy maple moths can lay about 200 eggs to ensure the continuity of their generation.

The male Rosy maple moth’s main purpose is to fly around looking for a mating partner and beget its kind. A process that normally takes about ten days to two weeks: after emerging from its cocoon, the Rosy Maple moth depends entirely on the energy it stored during its larva (caterpillar) stage.

See also  Is Toothpaste Poisonous to Mice? (We Know Answer)

The female Rosy Maple moths will attract adult males by releasing pheromones from a gland located at the tip of its abdomen. This scent diffuses in the air quickly, and the male Rosy Maple moth will, in turn, receive the signals using the receptors on its feathery antennas from over a few kilometers downwind.

Why do Some Moths Not Have Mouths?

Some moths do not have mouths because their sole purpose in adulthood is reproduction. While most adult moths have a short life span (about a week or so), they will find a mate and reproduce. These moths usually feed enough (on their favorite leaves) at the larvae (caterpillar) stage to sustain them during adulthood.

According to research, several moth species worldwide do not have mouths. The few that have, however, use them to feed and drink.

Among the few moth species with mouths include hawk moths (convolvulus hawk moth and hummingbird hawk-moth). They have proboscis used to suck nectar from flowers in the garden to sustain their ferocious appetite.

How do Some Moths Eat if They do Not Have Mouths?

Moths with no mouth will not feed or drink when they are adults. Instead, they will rely on whatever they eat as caterpillars. Moreover, these moths cannot live more than two weeks after emerging from the cocoon. Most moths without a mouth also do not have a digestive system.

Remember that all moths without a mouth can only live for about 7 to 10 days, relying solemnly on the fat stored during the larvae (caterpillar) stage. Similarly, the sole purpose of adult moths without mouths is to mate within the short remaining period and continue the generation.

After reading this article, you now understand which moth species have mouths and which don’t. You can also tell which species are hanging on tree branches in your garden by looking at the physical characteristics of the cocoon.

The next time you see a caterpillar in your garden, it could probably be a Rosy Maple, Gypsy, Atlas, Luna, or silk moth.