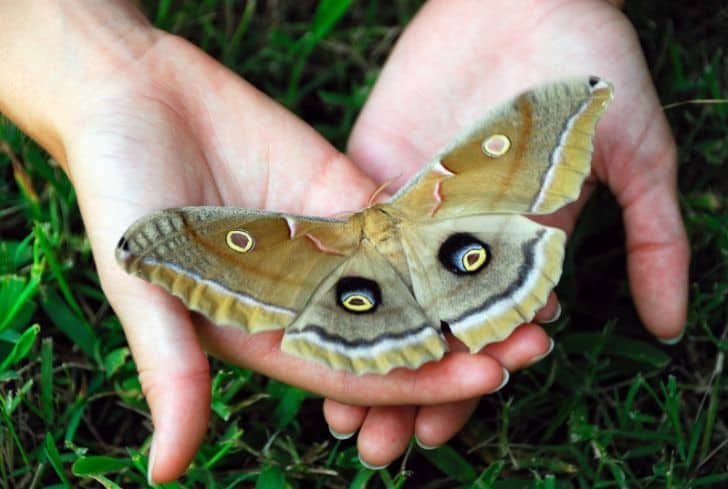 Moths are fascinating creatures. They exhibit strange behavior and characteristics like no other insect species. For example, most species do not eat or drink after emerging from the cocoon. This is because they possess no mouths.

Others, like the Emperor moth, Oak Eggar, and Fox moth, prefer to fly during the day. The last species, like the Yucca moth and Hummingbird hawk-moth, are pollinators.

This article addresses everything if you have been wondering if moths come out during the day. After reading, you will understand different moth behaviors and a few specific characteristics.

Read: Do Moths Have Mouths?

Do Luna Moths Come Out During the Day?

Ordinarily, it can be hard to spot a Luna moth during the day because they are nocturnal, just like most other moths. They will be most active at night when predators are few. However, you might occasionally spot a Luna moth lying still on a tree if there isn’t any threat.

A Luna moth might fly past you accidentally if it is either fleeing danger or feels like changing its resting position. Remember that Luna moths can grow up to 4.5 inches wide (wing span). So, flying around during the day will attract predators like birds and bats.

The main purpose of adult Luna moths is to reproduce. So, they will hardly come out during the day to find potential mates. Similarly, they do not have mouths and will sit back in crevices until it is dark.

At night, you might spot Luna moths flying around porch lights because they are sometimes attracted to light in the evening during the breeding season.

Where do Moths go During the Day?

During the day, countless moths will hide from predators like bats, birds, lizards, frogs, and other small rodents. They will sit patiently under leaves, between close buildings, or in dark crevices on the walls to rest and recover from their nocturnal activities.

Remember that almost all moths worldwide are nocturnal. They are also defenseless and need to look for innovative ways to stay alive. Nonetheless, it does not mean that they will come out at night. A few species, like the Emperor moth, Oak Eggar, and Fox moth, are day-trippers and prefer to fly during the day (as mentioned above).

Hiding during the day will not be a problem for moths because most do not even have a mouth or digestive system. If a moth secures a dark spot along the wall, it will instinctively hide and stay calm until the evening when its nocturnal activities officially begin.

Some moths will even try to get inside your house where it is safe from outdoor predators. Fortunately, they are not harmless, and you should not worry about finding a moth on the wall of your kitchen or under the table.

What’s further interesting is that moths have bodies that naturally camouflage with their environment. They have distinctive patterns on their wings to blend with tree trunks/bark, walls, and other solid objects. So, they will sit calmly on the tree’s bark if they can perfectly blend with it.

Do White Moths Come Out During the Day?

According to research, most moth species you find during the day have bold patterns like black and white. You can easily spot a white moth around the garden or bush. They often come out during the day because most of them are attracted to light.

Probably white moths come out during the day because their coats can camouflage with several objects in broad daylight. Also, you should note that white moths are available in different sizes, and you should know the exact species you come across at home.

The lawn moth, for example, is a tiny whitish buff-colored with a wingspan of about ½ to ¾ inches. They are common in the grass or lawn. You can spot them during the day because they operate close to each other.

The white satin moth is another species usually attracted to light. You can spot it in broad daylight close to willow plantations, hedgerows, parks, and gardens.

Do Gypsy Moths Come Out During the Day?

Today, Gypsy moths are known as spongy moths. These insects are among America’s most destructive moth species at their caterpillar stage. They will feed at night and hide during the day. Like other moth species, gypsy moths are also active at night.

Gypsy moths are native to southern Ontario and parts of Quebec City. The larvae stage is very destructive because they eat the leaves of over 500 hardwood plants leaves. When the gypsy moth pupates and turns into an adult moth, it will only live for about two weeks.

Like their counterparts, adult Gypsy moths do not have mouths and will feed on leaves to survive the few days after emerging from their cocoon.

This video contains more information about the European Gypsy moth’s history and its characteristics.

Why do Moths Come Out at Night?

Most moth species are adapted to operate at night and not during the day. They possess nocturnal behaviors, similar to other defenseless creatures in the wild. Furthermore, some animals in the wild come out at night when there is less competition for food from other larger predators.

As you continue reading, you must remember that some moth species, like the white moths, are diurnals, not nocturnal. So, they will be active during the day rather than at night.

Many people also believe that moths use the moon to navigate. So, they will come out in large numbers to find mates or for other reasons at night when the moon is out. On the other hand, homeowners believe that moths are usually attracted to bulbs at night because they are confused with the light and see the bulbs as moonlight.

How Long do Moths Sleep?

Unlike humans and many other animals, moths do not eat, drink, or do anything. Instead, their primary purpose as adults is to reproduce and then die. So, adult moths can sleep for as long as they need. Some moths might rest longer than others (depending on their energy levels or mood).

Conversely, moths are solitary insects and will find a safe and secluded spot to lay still without movement for more than 12 hours. Some might even apply still for more than 24 hours before flying into the dark – with some only twitching from their resting position if they feel threatened.

Moths flatter their wings seemingly at night. Hence, they require enough time to rest and recover all the lost energy.

Do Moths Sleep on Walls?

Yes. Moths can sleep on walls.  But remember that they are not actually “sleeping” but lying still. Moths can lay still without moving an inch on solid surfaces like the bark of a tree or any dark spot that camouflages them.

Inside the house, you might spot a moth in the attic, basement, or closet. Typically, they are fascinating insects. They are also harmless and will do anything to stay away from the light – not because of anything else but because they are safe from predators.

A moth needs to be cautious to survive its short ten days to two weeks of life. So, it will sleep on a wall matching its coat during the day and fly around at night looking for potential mates. However, you should remember that it is not sleeping but laying still for exceeding hours.

If you spot a moth on a wall in the daytime, it is probably resting and preserving its energy. This is because most insects do not have a mouth to eat or drink. They are in a state known as torpor, where you cannot spot any movement.

Furthermore, you might notice that moths will not sleep (lay still) on exposed walls. They like secluded, dark, or cracks.

Read: Do Moths Have Teeth?

Where do Moths go During the Winter?

Like other animals and reptiles that hibernate during winter, moths do not hibernate to maintain their body temperatures. Instead, they overwinter or stay dormant until the cold season is over. Typically, moths have evolved to be in the pupa stage during winter.

These insects depend on external heat sources like the sun or artificial light at night to give them warmth. You might spot moths clustering and fly around porch lights or street lamps.

In winter, adult moths usually have difficulty surviving extreme cold temperatures. So, it can be hard to spot an adult moth in this phase of the weather.

In winter, the moths will build cocoons on twigs or underneath leaves away from predators with other species and will spend the winter as eggs during winter.

If you are keen enough, you might notice moths and butterflies immediately after the winter season. In summer, the moths will be preparing to lay eggs or even lay still, waiting for their next phase of life.

Moths are fascinating creatures. Today, these harmless insects are available in thousands of different species. Some are large, and others small. Some sleep during the daytime and become active at night, others vice versa.

Luckily, this article shows that most species, like the Luna moths, are active at night. Also, you now understand the different spots inside your home you might find them hiding.