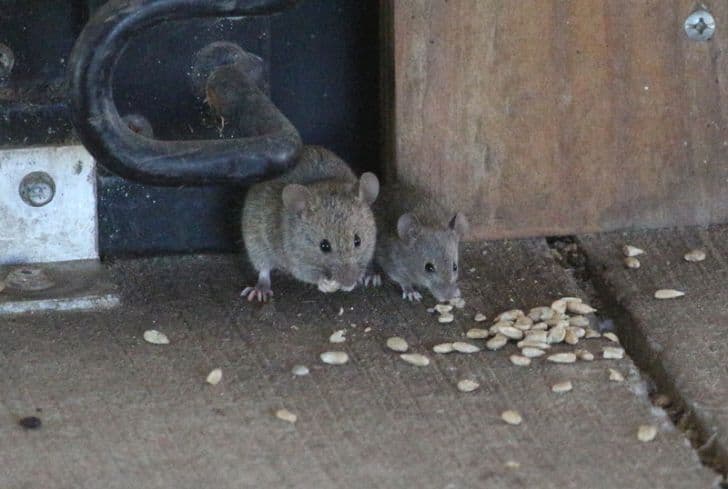 Finding mice in your home can be a frightening experience for you. To say nothing of the fact that some people loathe them in the first place. Mice are scavengers who will eat anything, and many other factors will attract them to your home.

Most mice eat fruits, seeds, grains, and vegetables, as well as other animals because they are omnivorous. Due to their small size, they prefer smaller prey such as insects.  Mice are known to feed on dead birds and animals, so don’t be shocked if you see them. Do mice eat grasshoppers? Let’s check it out.

Grasshoppers are one of the insects that mice will eat. While most mice like to eat plants, the grasshopper mouse is more carnivorous. Grasshoppers, spiders, worms, scorpions, snakes, beetles, caterpillars, lizards, millipedes, centipedes, and snakes are among the animals they will eat.

If you’ve never heard of a grasshopper mouse, you might be surprised to learn it exists. Northern grasshopper mice are found chiefly in Northern regions of the United States, mainly Canada, Mexico, California, and Minnesota.

Let’s take a look at the features that distinguish grasshopper mice from other mice species:

Field mice eat a wide variety of foods. Nuts, fruits, fungi, insects, seeds, berries, and snails make up most of their diet. Insects, plants, grains, and seeds are all in their diet. Grasshoppers, worms, tiny snails, larvae, butterflies, beetles, crickets, caterpillars, and millipedes are among the insects they consider edible.

Field mice are found in gardens, rough grassland, and wooded areas. Their body is sandy brown, and their belly is white to gray. The tail of a field mouse is the same length as its head and body.

Field mice have little choice but to eat whatever they can get their claws on. Most of their diet will consist of stems, leaves, tree barks, grass, roots, and any other plant they come across in the fields.

If food is scarce, mice will eat dead mice. They are scavengers who have no reservations about eating dead mice for protein. If they become overcrowded and food becomes scarce, they will consume each other to reduce their population in a specific area.

In the winter, mice may have difficulty finding protein and other foods; therefore, they will eat dead mice. Protein helps them stay warm during the winter months.

Though, mice are a little more cautious regarding dead mice. They examine the surroundings first; after all, it could be a trap. Other mice will stay away if you leave dead mice in your trap.

Yes, some mice, like the deer mice, love eating insects. Mice are omnivores, meaning they eat both animal and plant-based diets. Mice can feed up to 15-20 times per day, indicating that they are voracious eaters. They’ll consume anything they come across, including insects.

Fruits, seeds, and insects such as grasshoppers, caterpillars, leafhoppers, and beetles are all favorites of deer mice. However, don’t hold out hope that this particular mouse species will assist you in eliminating pests in your home because they rarely enter homes.

Because insects have a particular taste, mice like them as a protein source. Mice tend to enjoy cluttered spaces and are likely to come into contact with insects that live in those cluttered areas. To remove the insects from their site, mice will eat them.

Mice will consume anything they see, whether outdoors or in the house. They prefer dead bugs over live bugs since they don’t have to struggle to chase them around. The mice will eat the dead bugs, which provide them with protein.

Mice are scavengers, yet they are also lazy, especially if they have to struggle a lot searching for food. They favor simple foods and possibly ones they don’t have to search for or chase down. Dead bugs are easy to come across.

Mice have no trouble eating dead bugs, whether they died naturally or you killed them.

Can Mice Eat Through Plastic?

If given enough time, mice will chew through plastic. Mice will gnaw through the plastic to get to the food if you have a mice infestation. A mice infestation will make food scarce, and every piece of food counts.

See also  Do Mice Eat Snails and Slugs? (Is it Safe For Them?)

Even mylar bags (food-grade plastic bags with an aluminum outer covering) aren’t resistant to mice. You can still store your food in mylar bags, but make sure they’re in mouse-proof metal or glass containers.

Most people believe storing food in thick Plastic Storage Bins will keep mice away. It may take them a little longer to chew through the plastic, but they will eventually. Mice have a keen sense of smell, so if you’re keeping food in those plastic containers, they’ll go to great lengths to acquire it.

Mice seem to like dead and alive insects, as they are a common source of protein for them. Cluster flies are highly appealing to mice.

Cluster flies are similar to houseflies; however, they are much larger. As they prepare for the long winter, they will generally infiltrate your home in the autumn. They will be seen near your windows during the day since they are attracted to light, but at night they will move to the attic or loft.

They become a major attraction for the mice due to their larger size than a typical fly. During the winter, the mice will eat cluster flies as a consistent source of protein. Most people say they rarely see dead flies in their homes if they have a mouse problem.

Mice are one of the natural predators of roaches. Given how fast roaches move, mice may have difficulty catching one. Finding a dead roach is a blessing in disguise for the mice. It offers them a feast.

Roaches are a common part of a mouse’s diet. Mice aren’t picky about which roaches they consume and will eat a wide variety. They will gladly eat both German and American species, large and small. Roaches are a once-in-a-while treat because mice find them difficult to catch unless they are dead.

The most intriguing aspect of these two pests is that they are mutually dependent. Roaches eat mouse droppings, while mice eat roaches. However, don’t rely on mice to eliminate your roach problem. Mice dislike capturing roaches and will seek out food sources that do not need chasing.

Mice are frequently attracted to foods with a strong flavor and smell. They are always hungry and will consume anything that comes their way.

Let’s look at the different types of mice and the foods that attract them.

See also  Does Irish Spring Soap Keep Raccoons Away? (And What Attracts Them?)

Seeds and grains are favorites of house mice. If you keep both in the house, the mice will eat them. If you don’t cover your pet’s grain food, mice will be able to fill their stomachs. You’ll want to keep all of your food covered and possibly in airtight containers.

House mice do not enjoy eating clothes, threads, or cords, as some people believe. They chew on them to obtain materials for their nests.

Pet mice are mice that people keep as pets. You don’t have to be concerned about your pet mice gaining weight as they scamper around your house eating various things. You can avoid this by feeding your pet one of these two types of diets.

A combination of pet mouse food pellets, veggies, and fresh fruits is the healthiest food for your pet mouse.

Street mice are more aggressive and thrive in urban and suburban areas. The mice will consume anything they see in the garbage cans, alleyways, and streets. They will have a wonderful feast if they come across fresh fruits and veggies in the market areas.

Mice in the street must often make do with whatever food they find. They dislike proteins, but if they come across them, particularly in hotels and restaurants, they will gladly consume them.

Street mice can turn cannibalistic in extreme situations. It means that they’ll turn on each other if they can’t acquire food. Some species will even eat their tails.

From the time they are born until they are older, baby mice will consume their mother’s milk. Their mothers will introduce seeds, grains, fruits, and corn at a later stage.

Baby mice do not venture out in search of food; instead, they rely on their moms. The majority of them will consume breast milk until they leave the nest.

Unless mice are kept as pets, most people consider them destructive. However, we’ve seen that if they can get rid of some pests in your home, they’re not so bad.

However, you should not overly encourage them because they are also disease carriers. But, we can all agree that having one as a pet could be ideal.