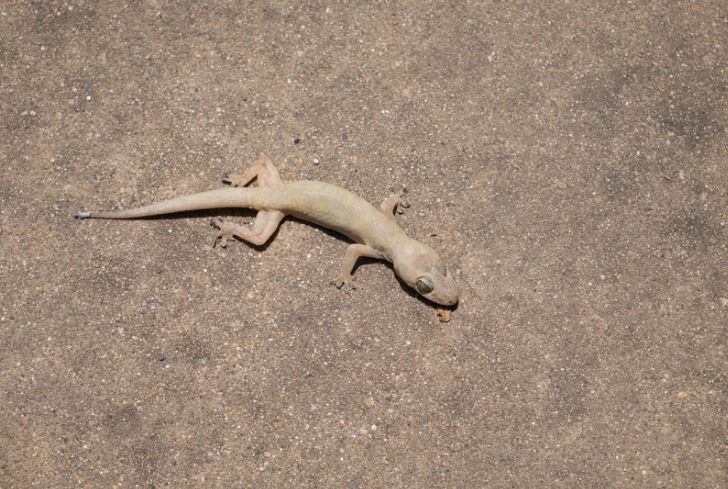 It can be shocking to find your pet lizard lying still one day. You could be prompted to bury it if you believe it is dead. But hold for a second, did you know that lizards pretend to be dead?

When faced with a threat, lizards can react in several ways like most animals and pests. While some go into full defense mode and attack their predators, others, such as the lizard, will pretend to be dead to escape.

The lizard must become rigid and fully relax its muscles to pull off this act successfully. If the limbs are stiff, the lizard is already dead.

Do Lizards Pretend To Be Dead?

Yes, lizards pretend to be dead for many reasons, the most common of which is to protect themselves. Another purpose for faking death is to attract possible prey or mate with a male or female lizard. Only a few lizard species act as if they are dead.

Thanatosis (death feigning) or tonic immobility are terms used to describe the act of pretending to be dead. Most lizards will pretend to be dead to escape being eaten by their predators. Some lizard predators would prefer to eat a live lizard rather than a dead one.

When lizards want to catch their prey, they will pretend to be dead. When their intended prey believes the lizard is dead, they will feel safe approaching it when the lizard catches them.

Here are a few lizards that are well-known for pretending to be dead:

How Do Lizards Play Dead?

When a lizard senses danger, it quickly goes into tonic immobility. When the lizard becomes rigid, most predators will assume that it has died and will no longer be interested in eating it.

When a lizard is immobile, you’ll observe a drop in respiratory rate and an irregular rhythm.

If the lizard is climbing, it will drop to its back and appear quite rigid. Its eyes are still open and remain so until it no longer perceives a threat. The lizard has learned to do this well, and because they have seen it work, they continue to fool their predators.

When the lizard is walking and notices something which appears to be a threat, it will stop. It will then flip over and stay in that immobile position for as long as you are present. The lizard may cringe when you try to touch it, but it will not attempt to escape.

When you put the lizard on its back, it can go into tonic immobility. The lizard will feel threatened in this position and will try to deceive you or any predator away by acting dead. Even a pet lizard will instinctively act dead when placed on its back. Once the perceived danger is gone, the lizard pops right up.

How Long Do Lizards Play Dead?

Lizards can easily fool you that they are dead, especially when lying motionless for long periods. Knowing how long a lizard can play-act dead will help you understand how to react when a lizard behaves that way.

Lizards can play dead for a few seconds or minutes, but they can even last longer, depending on the circumstances or species. However, the lizard will continue to act as if it is dead as long as it detects the presence of its predator.

If nothing is done to disturb it, the lizard can stay in this position for 15 minutes. If the lizard continues to act dead for longer than that, it will face a life-or-death situation.

A dying lizard can take up to three days to die; however, this time is shorter in the summer.

A young lizard takes a shorter time to die than an adult lizard.

How Do You Tell If a Lizard is Alive or Dead?

It’s important to determine whether or not a lizard is dead, especially if it’s a pet lizard. You can leave it alone and go about your business if you realize it’s pretending to be dead.

However, if you find the lizard is dead, you can dispose of it. If you have a pet lizard, you can either clean its cage and dispose of it or get a new lizard.

There are several ways to determine whether a lizard is genuinely dead or is simply playing a trick on you. We’ve highlighted a few of them below.

How To Save a Lizard When It Is Dying?

It’s not always that your lizard will act as if it’s dead; there are times when your lizard is genuinely dying. To rescue a dying lizard’s life, you’ll need to be aware of the various symptoms it can portray.

Here are some signs that can tell you if a lizard is dying:

How Long Can a Lizard Go Without Eating?

Depending on a lizard’s species, age, size, and overall health, they can go without eating for 2 weeks.  Some lizards can survive without feeding for up to 2 months.

On the other hand, younger lizards should not stay longer without eating. They require a great deal of energy to adapt to their environment and grow. A young lizard or a newborn lizard should not go without feeding for more than 1 week.

Compared to small lizards, larger lizards are more likely to go without food for long. Lizards store fat in their tails, breaking down the fat stores when they cannot get food. The larger the lizard, the more fat stores it has.

In most instances, healthy lizards will be able to survive for longer periods without food. Lizards with particular ailments or illnesses will need to eat regularly.

The species that a lizard belongs to will determine how long it can survive without eating. Adult hearted dragons can only last three weeks, although adult leopard geckos can last a month.

It would be terrible if you found your pet lizard lying motionless and decided to dispose of it, thinking it was dead. It’s good to know that lizards can act as if they’re dead.