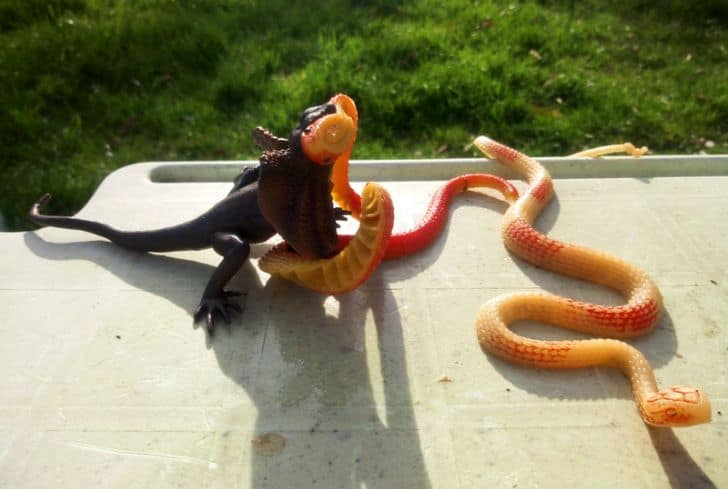 Squirrels look cute while running through your yard until you remember the damage to your garden. They are good diggers and have dug up the roots of your vegetables and chewed off the bark of your fruit trees.  You are looking for ways to repel squirrels online. And you note that one of the most frequent questions is, “Do fake snakes keep squirrels away?”

Out of curiosity, you also start searching for the answer to that question. We shall answer the same question here, among others. The other questions we shall answer are which other animals are scared of fake snakes and whether pine sol and mothballs repel squirrels. You will also learn what scares squirrels, how best to repel them, and the smells that deter them.

Yes, fake snakes scare squirrels. But to make your fake snake appear real, you’ll need to position it properly. Secondly, you will need to move it regularly. Doing so will prevent the squirrel from realizing the fake snake isn’t alive after a few days of observation.

If you use a homemade snake, make its shape into an S. Having two to three fake snakes will scare squirrels from your yard.

When squirrels spot the fake snakes, they will flee. Using fake snakes is considered a more environmentally friendly way of getting rid of squirrels.  In most states, using traps or poison is illegal and cruel to animals.

What Do Fake Snakes Scare Away?

Most animal pests are scared of fake snakes. Some animals that strongly fear fake snakes include rabbits, chipmunks, birds, deer, moles, and voles. The more realistic a fake snake is, the more effective it is at scaring animals. Most animals have been preyed upon by snakes, and many will avoid an area where they have spotted one.

A fake snake will also work, though a real one will work better to keep these animals away.

But would you be okay with having a live snake in your garden or yard? Birds and other animals use their natural survival instincts to flee from their prey. Owls, hawks, cats, and snakes are the main bird predators. A fake snake needs to be convincing enough to be effective. Additionally, it must match the type typically seen in your area.

Find a snake that won’t be stiff but one you can readily move around to make it look more real. Also, get a fake snake the same size as the real one. Most animals won’t be scared of a small fake snake and may not even spot it.

Although the fake snake may appear frightening to them due to their weak vision, they will know it’s fake through smell.

Rats and mice are considered clever and cunning, and a fake snake cannot easily fool them. You must remember that, although they are not exclusively nocturnal, mice and other rodents are typically more active at night. Unless bright lights are shining on them, there is a good chance that they won’t see the fake snakes. Mice typically use their sense of smell to determine whether or not there is danger.

Snakes feed on rodents; therefore, if you can get a fake one that smells like a real one, it’s possible to use a fake snake to keep rodents away.

What are Squirrels Afraid of?

Squirrels are afraid of natural predators. But since you can’t keep squirrel predators such as foxes and coyotes, their urine will work better. For the most part, gardeners use predator urine to deter squirrels from their fruit and vegetable patches.

Commercial repellents that resemble the smell of urine are available. Once you’ve bought them, you can spray them in areas where you frequently see squirrels.

You can also spray some towels and store them in your attic to deter squirrels. Remember to respray the towels every few weeks to maintain the powerful scent of the predator’s urine.

See also  Does Pine Sol Kill Ants? (Yes. It Will)

What is the Best Way to Repel Squirrels?

It is not the most humane approach, but keeping squirrel predators in your garden will keep squirrels away permanently. The following methods for repelling squirrels are more humane and effective:

Even though they are quite expensive, they work. It is a scarecrow motion-activated sprinkler that sends out a three-second pulsating spray of water that is completely safe. The sudden movement, noise, and water scare the squirrels rather than the scarecrow. You might even find one that can imitate predatory sounds like coyotes or hawks.

Most people are unaware of the fact that some plants repel squirrels. Try growing plants that repel squirrels, such as daffodils, lilies of the valley, hyacinth, geraniums, and Galanthus. The strong smells or colors of some of these plants are what the squirrels find repulsive.

Planting the plants in your yard or around your garden will keep the squirrels out.

3. Remove sources of food and water

However, if you have pets that still need to feed, such as birds, you can squirrel proof the birdfeeder.

You can use other scarecrows in addition to fake snakes to scare the squirrels away. The more real the scarecrow resembles a squirrel predator, the better. Use a fake owl, hawk, or cat to keep the squirrels out of places you don’t want.

The four strategies listed above are effective but temporary ways to keep squirrels away. The easiest approach to permanently eliminating squirrels is to consult a wildlife removal expert. Squirrels spread diseases, and if threatened, the squirrels can be dangerous.

Does Pine Sol Keep Squirrels Away?

Pine sol has a powerful smell and, as such, will keep squirrels away. Sadly, pine sol not only repels squirrels but also kills them. Pine sol contains chemicals such as pine oil, benzoic acid, and sulfonic acid that can lead to death if ingested by squirrels.

Additionally, it is a strong skin irritant. Pine sol exposure can cause skin cancer, liver damage, and kidney damage over an extended period.

Spraying the grounds and their burrows with ordinary Pine Sol requires one cup of pine sol per gallon of water. The smell will deter squirrels from visiting these areas. However, it is not the best method for keeping squirrels away because it is toxic.

Do Mothballs Keep Squirrels Away?

Squirrels dislike the smell of mothballs and will keep far away. While their smell will keep them away, it’s not the best method to keep squirrels away. Mothballs are deodorant- and pesticide-containing chemicals in the form of balls. The mothball’s chemicals will harm the squirrels. Because of this, using mothballs to repel animals is prohibited in the majority of US states.

If you must use mothballs, it is best to use them sparingly because doing so puts the squirrels in grave danger. Position mothballs close to plants that the squirrels frequent. As the mothballs’ scent wears off every few weeks, replace them.

You’ll need to use mothballs with extreme caution. The soil and water will get contaminated if you use mothballs in your garden or yard. Their toxic fumes will affect you, your family and your pets.

It’s time to be clever if the squirrels are bothering you. Use fake snakes, squirrel-repellent plants, motion-detecting sound blasters, and other fake decoys and keep food and water sources away. To deter squirrels, you can use scents like peppermint, cinnamon, white vinegar, chiles, and coffee grounds.

Pinesol and mothballs are both effective but poisonous and should not be used on squirrels.