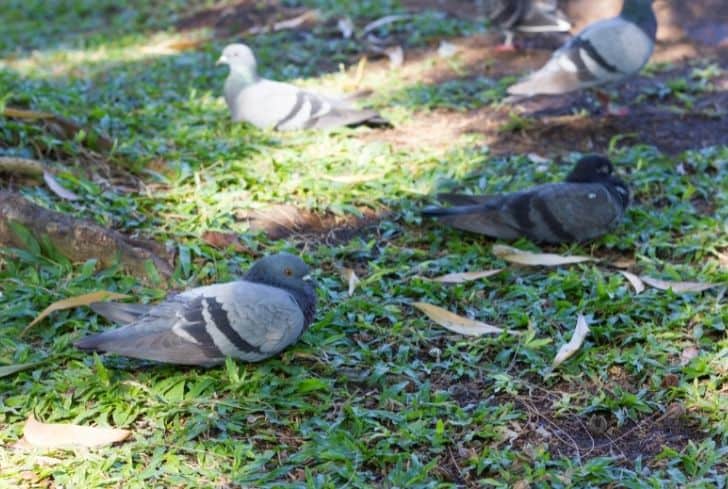 They are well-known for being quite lovely birds.

Who are we talking about?

A pigeon has a fairly peaceful demeanor with a skin saddle between the beak and the forehead. This stout seed- or fruit-eating bird is characterized by a tiny head, short legs, and a cooing voice.

Soft, chubby, and small-billed. It never fails to strut around without a distinctive bobbing of the head. You must know that pigeons are strong and rapid fliers thanks to their large wings and robust flying muscles.

Now, what do you do when you find one of the world’s oldest domesticated bird species in your garden?

Are you free to shoot pigeons or not? In this post, we’ll be providing an answer to this question. Read on to learn more!

Is It Illegal To Shoot Pigeons in Your Garden?

It’s possible you don’t like the sight of pigeons or they just create a disturbance. So, is it illegal if you get rid of these ones from your garden?

Yes, shooting common pigeons in your garden is legal. There’s a but, you must take care and ensure that the pellets do not go over your yard’s border.

Pigeons are one of the few exceptions to the federal and state restrictions that protect all wild birds in the United States, therefore you can kill most of them.

This means shooting pigeons on your private property is legal, however, it is necessary to proceed with caution.

Shooting a pigeon is most likely to be done with an air rifle. Therefore, while using it, you must ensure that the pellet does not exit your garden boundary; if it does, you are breaking the law.

Are You Allowed To Shoot Pigeons?

This is a dicey one.

It depends on whether you are legally permitted to own and carry a firearm in the first place or not. Only then can it be decided whether you can shoot pigeons.

To acquire a gun in many nations, you must obtain a special license and adhere to a strict set of requirements.

See also  Can I Paint My Car in My Driveway? (Not Recommended)

The guidelines cover how to use or handle the gun properly, as well as how to store it.

Once you pass through the requirements and get a license to a gun, then you’re allowed to shoot pigeons.

However, the second point to consider is whether or not you are permitted to fire a weapon in a particular place.

Now, to answer the question, are you allowed to shoot a pigeon?

Yes, with a gun that is licensed and in a place where it’s legal to shoot a pigeon.

How Can You Legally Kill a Pigeon?

You can legally kill a pigeon by shooting it in your garden. It is the appropriate way in most situations.

For killing a pigeon to be considered illegal, shooting in a city has to be involved.

Remember, a licensed gun is a factor you must consider to legally kill a pigeon.

Here are some rules about air guns in different countries you might need to be aware of:

• In the UK, you may borrow an airgun that is less than 12 ft/lb and fire it under supervision if you are under the age of 14.

• You can also borrow an airgun and shoot it without supervision if you are 14-17 years old.

• You can have an airgun in your possession if you are 18 or older.

• Your supervisor must be at least 21 years old if you must shoot in Northern Ireland.

So, how can you legally kill a pigeon?

You can legally kill a pigeon by discharging its firearm in the quarter-mile of a residence with a licensed gun.

Anything outside this could be illegal.

Ways To Get Rid of Pigeons in Your Garden

Truth be told, controlling birds is a difficult task, especially if you have a vegetable garden or have leftovers lying around.

Birds aren’t fussy when it comes to food with seeds, grains, berries, breadcrumbs, and worms being their favorites.

Not to worry, here are a few things you can do, to get rid of pigeons in your garden:

• Make a scarecrow or employ hawks and owls as decoys. Fake snakes may also frighten some of the birds away.

• Use old CDs as sparkling reflective items to frighten them. Several of them should be hung every few meters around your garden.

• Eliminate areas pigeons can rest and nest. Using human spikes and fishing lines are two brilliant methods to keep them out.

See also  Can My Neighbor Paint My Fence? (And Nail Things?)

• Take down any bird feeders for other bird species as pigeons will eat just about anything. Failure to do this will keep them coming back.

• Use anti-bird spikes to deter pigeons from perching in places where you don’t want them.

Not to worry, the spikes will not necessarily injure the birds but will prevent them from nesting where you place the spikes.

• Use a kite-shaped decoy bird image to wobble in the wind to make it difficult for the pigeons to land on your property, it will reduce their population.

In reality, there are more than 400 million pigeons on the globe today, with the majority of them living in cities.

Where can you find them?

They may be seen in any city near park benches, bins, and fast food outlets, fond of gathering in large numbers around food sources.

With a number as large as this, is it safe to consider pigeons as pests?

Yes. Pigeons are classified as a “pest species” by municipal governments. Also, people who work in the pest management sector refer to them as vermin.

Pigeons find their way in the streets because of our welcoming hands as humans.

Through our unintentional supply of constant chips, sandwich crusts, and crumbs to them.

Rats and pigeons have many parallels due to their scavenging lifestyle.

Locals refer to them as “flying rats,” and local business owners, particularly those in the food industry consider them a nuisance.

Here are a few things pigeons do that makes them considered as pests:

1. Pigeons dig into garbage bins and spill waste onto the streets which causes the environment to be unsightly.

2. They also cause structural damage and will take advantage of any weakness in a roof to construct a house for themselves.

3. They spread parasites with their feathers and droppings.

What’s more? Their droppings pollute public spaces and, regrettably, are capable of causing slip and fall accidents for humans.

As if it’s not enough, the continuous droppings deface public monuments, making them practically uncomfortable to look upon and poorly preserved.

4. Pigeons like to make a mess of buildings, sculptures, eaves, signs, bridges, and other structures by establishing nests in virtually any place they can.

5. They also have the potential to endanger aviation travel by flying through windshields, posing a serious threat to the plane and its passengers- how typical.

6. Don’t be surprised to have feathers of huge flocks of pigeons clogging your intakes and filters. When these find their way in, they cause damage to gear like generators and other machines.

If they do, what exactly appeals to rats about pigeons? Let’s take a look:

1. The bodies of dead pigeons

2. Food left out for pigeons

These are crumbs, chips, and bird feeders given by well-intentioned bird enthusiasts to pigeons. They also draw in rats.

It is no surprise that rats eat almost everything. Therefore, pigeon eggs also attract these pests and are likely to get eaten.

Is it possible for pigeons to attack people at all?

This calls for attention because, according to the experiences of people on streets in the city, they claim pigeons attack them.

But can pigeons truly attack humans?

What happens sometimes is, when you get too close to a pigeon’s nest, it will beat you with its wings. You are likely to feel the impact, but your fingers will not be broken.

If a person ducks or even runs away from flying pigeons, in a square, for example, it shows he/she doesn’t have much knowledge of pigeons.

Most times, the pigeons are just fleeing, sometimes quite near to your body or face but definitely not pursuing you.

Therefore, the only exception is this:

If you approach their nest of eggs or chicks, they will inflate up, make sounds, and smack you with their wings.

We are assured that at this point, you now have the answer to your question:

Can you shoot pigeons in your garden?

Yes, you can shoot them in your garden.

All you need to pay attention to is your license to shoot with an air gun and on what property you’re shooting (private or public).