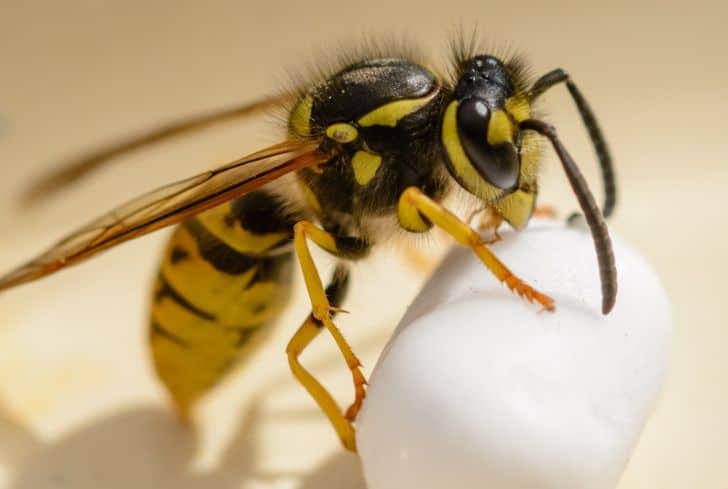 Having wasps inside your home can be dangerous, and eradicate them as soon as possible. A commonplace for wasps to nest is in attics and wall cavities. If you notice wasps flying out of a specific spot on a wall, that’s a sign there’s a nest.

Choosing an insecticidal solution for wasps is always tasking. Even though the wasp, like the bee, has a role in pollinating some plant species and protecting plants from some parasites, you must control their growth in your homes to prevent damage to the furniture and woods.

Removing wasps and their nest is dangerous, and must you must do it with care. In this article, let’s see if wasps can chew through plastic bags and how to get rid of them from your home.

Do Wasps Chew Through Plastic?

Wasps can chew through plastic but that depends on what kind of plastic it is. They can chew through plastic found in garbage bags and use them to make durable nests for themselves. Wasps prefer to feed on materials like wood from an organic source. They often resort to chewing through thin plastic when organic foods are unavailable to fulfill their appetite and make their nest.

When you see small holes or thin scratches forming on your sliding, furniture, or decking surfaces, that shows you have wasps in your house. These insects can chew through building materials, including those made of plastic and wood, affecting the integrity of your home.

Chewing through plastics is not as easy as chewing plastic for wasps. We have some thick-grade plastic that wasps can’t even feed on. Most times, plastics are the last resort if woods are not available.

What are Wasps Most Attracted To?

Wasps typically look for things containing protein, sugar, and water to feed on. Wasps are also attracted to sweetish air fresheners, perfumes, and yellow, orange, and blue-colored clothes. You can avoid these when working in the garden.

Do not leave food open, including barbecue meat or pet food. You should know that wasps are attracted to ripe or decaying fruit. It attracts them in their search for sugar. For the same reason, they tend to haunt garbage cans. Make sure you remove the fruits from the trees and cover your container well.

If your relaxation area is under a vine, try protecting the bunches with paper bags. If they’re brown, all the better. They will think it’s another hornet’s nest and won’t get close.

Can Wasps Chew Through the Wood?

We have different species of wasps, and almost all of them can chew on wood. They chew on wood by a process called girdling. They often use wood to make cellulose to make their nests.

Most of the wasp that feeds on the wood are in the larvae stage. They feed on it as their food. Even though they can chew on other materials like plastics, they prefer wood. Softwoods are the best diet for larvae in the early days. As they grow in size, they will be able to chew on harder wood.

They can make their food out of anything like pieces of furniture, wardrobes, or beddings. They chew on these house materials and create some unsightly holes in areas like your deck, fence, and hardwood floors.

Do Wasps Sting For No Reason?

A wasp can not sting you for no reason. When they feel threatened, the wasps bite with a specific force with their powerful mandibles. They sting as a defense method, and when injecting their venom, they conserve their sting so that they can do so repeatedly, unlike bees that only sting once and die. They do not sting when they are not attacked.

Wasp stings can be excruciating, so having one of these insects fluttering around us at home can rob us of peace of mind. Wasps are arthropods with a stinger located in the back of their abdomen to defend themselves.

When they sting you, they inoculate your skin with poison. The wasp sting usually produces a local reaction to the venom itself. When you are stung, you can have intense pain, swelling, and redness in the area around a white papule, which is the place where the wasp introduced the poison.

There is also burning and itching in the area of the bite. Most symptoms will disappear in some hours, although sometimes they last for days. Usually, the swollen area does not exceed five to ten centimeters around the bite.

Wasps will follow and chase you once they feel threatened or believe their nests are in danger. Immediately, they step up their defense and can do anything to remove the threat for them to escape or their nest. This is why they can follow, chase or sting you.

You should not make the mistake of running when you encounter a wasp. When you start to run away, it gets closer and chases you because you are making more movement, and it is getting more threatened.

Another reason why a wasp might chase you is if You have a scent that the wasp thought could be a source of food. It will come closer to check. When you are close to the wasp’s nest, it will chase and escort you away. At this point, the insect is aggressive and ready to sting if you get closer to its nest.

When you kill a wasp, the body releases a pheromone to alert other nearby wasps. The chemo that the dying wasp releases alerts other wasps to be on the lookout.

Even though not every wasp will come and aid a dying wasp, some will decide to ignore the call for help. You have to note this to avoid being overrun by groups of wasps. If you are dealing with solitary wasps, there is a low probability that they will get reinforcements. Therefore, you do not need to worry about being overrun.

You should always be on the lookout whenever you manage to kill a wasp. The pheromone they release after death is much stronger than that of a wasp under attack. This will put every nearby wasp in a state of alert. At this stage, they are aggressive and can bite and sting you. Therefore, the more you kill a wasp, the more wasps get attracted.

How To Get Rid of Wasps From Your Home?

Eliminating wasps is necessary, especially if they have created a nest in your house. Although they are useful insects, they become dangerous if they nest in places frequented by man. The nest will become larger, and a concentrated number of Wasps will generate serious cohabitation problems in your home. Using home remedies like lavender, repellent leaves, and candles, you can get rid of wasps.

Other plants that act as natural repellents are bay leaf, jasmine, and basil. All these plants have a magnificent odor for humans, but curiously, they are very unpleasant for insects and will not want to be nearby.

You can also use homemade preparations, such as lemon and vinegar, which mixed with water, work very well. Spray the areas where you see wasps, and you can scare them away quickly. The same goes for mint, or mint, and cucumber.

There are wasp traps that kill them quickly. You can take a basin and put any cooked meat aboard if you have a garden. Afterward, we will fill the container with water and pour neutral soap so that the board floats. The wasps will come to eat, attracted by the smell of meat, but having little vertical margin to take flight, they fall into the water and drown.

To prevent wasp nests from appearing, it is advisable to build a fake nest. The wasps, like many insects, are very territorial, and they will never make their own nest without they see that other insects have been ahead of them. Therefore, building a fake nest is an excellent option.

On the other hand, if they have already done so, the wasp nest will have to be eliminated. To end a hornet’s nest, it is best to impregnate cotton with alcohol and burn the nest. It is highly recommended to do it either in the morning or at dusk when wasps are less active and may have less chance of defending and attacking us. This option is something unpleasant, but of course, it works.

Wasps do not like candles, so if you are in the garden eating or having a barbecue and want to scare them away, you can light some candles around the fire since candlelight scares them away. Some candles contain citronella, which in addition to providing a magnificent odor, are very effective in scaring away wasps and scaring insects in general.

What Rodents Can Chew Through Plastic?

Rodents like rats have teeth harder than lead, aluminum, copper, and iron. They often gnaw through metal pipes with their strong teeth. Therefore, most rodents can easily chew through plastic with this type of tooth.

Rats can even gnaw their way through some concrete. Rats can enter homes at ease by chewing through plastic air bricks.

Wasp is what you must eliminate as soon as possible from your home. Being clear about their habits can help get rid of them naturally. You can also make use of insecticides, traps, or chemical products.