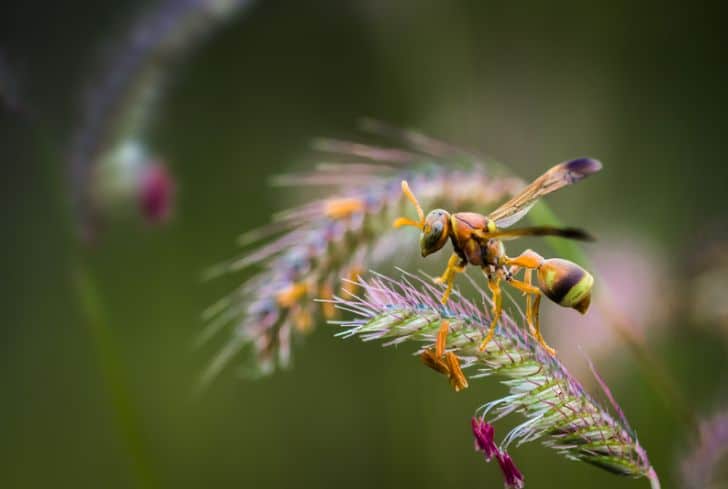 Don’t be shocked if you see a hornet flying out in the rain. The hornets’  wings’ speed, strength, and structure allow them to flap their wings while ignoring the water drops.

Unlike their wasp counterparts, who may struggle to function in the rain, hornets are unafraid to go about their job. You shouldn’t try a surprise attack on the hornet merely because it’s raining since you might get stung.

The hornets’ wings are usually not soaked by raindrops and are not thrown off balance when raindrops hit them. The hornets locate their nests away from the weather elements, despite their ability to fly in the rain.

Regardless of the weather, the hornets will work all day and night. They are not bothered by rain unless it is extremely heavy and violent.

Do Hornets Fly in the Rain?

Hornets do fly in the rain. The hornet’s sheer power and perseverance allow it to survive in the rain. Hornets can withstand a little rain, except for severe storms and significant rainfall.

Hornets avoid strong rain and storms because the falling water makes it impossible to do their job.

Rainfall has an impact on hornets’ food supplies. Rainwater floods the nests and dilutes the sugar-rich items eaten by hornets, such as leaves, tree sap, and insects.

They like to construct their nests away from the rain and light, hiding them in voids and cavities wherever they choose to build.

While most people believe that the greatest time to get rid of a hornets’ nest is when it rains, they are wrong. A full swarm of hornets could assault you if you get near the nest, which has hundreds if not thousands of them.

Water will kill underground hornets, but it will not reach hornets flying around. Treetops, attics, hollow tree trunks, sheds, under roofs, and grounds are common places for hornets to build their nests.

If massive torrents of rain enter the hornet’s shelter, the nests are swept away by the water, killing any hornets inside.

However, most hornets make their nests in difficult-to-reach locations, such as trees, roof overhangs, and shrubs. Their nests, which are in the shape of a football, are simple to spot.

On the other hand, you can kill the hornets using soap and water. If you want to kill hornets using water, this is the soap mixture. To 240ml of water, add one spoonful of soap. Fill a spray bottle halfway with hot water and add the soap.

Spray the wasps until they stop moving. When spraying directly, a hose-end sprayer is also more useful. It’s the optimum moment to spray when all the hornets are in the nest.

The optimal time to assault the nest is before daylight when the worker hornets have returned and are resting. In the event of a surprise attack, make sure to put on protective gear and equipment.

Are Hornets Wasps the Same?

All hornets are wasps, and there are around 20 different species of hornets on the planet. The European hornet and the bald-faced hornet are two varieties of hornets.

Hornets are larger and rounder than wasps. Wasps have a slimmer appearance than hornets. Hornets have yellow and black striped rings, while wasps have red, black, or blue stripes.

Hornets are social insects more than the other wasp species. They live in colonies, with the queen being the only one who survives the winter.

Wasps enjoy scavenging for proteins and sweeter meals and eat other insects occasionally. On the other hand, Hornets feed on other insects while avoiding proteins, saps, and sweet nectars.

While hornets enjoy “dancing in the rain,” wasps are less enthusiastic about flying in the rain. Wasps are more susceptible to rain effects than hornets due to their tiny bodies.

Can Hornets Sting More Than Once?

A hornet’s sting is more painful than a wasp’s because hornets carry neurotoxins, fatal to persons with allergies. Don’t take the sting of a hornet lightly if you are allergic to stings.

Hornets are benign creatures who will only attack you if they perceive you as a threat. Hornets are a social subspecies of wasps that dwell in well-organized colonies.

But don’t dismiss these timid creatures. Their sting is said to be extremely harmful. The amount of venom they may emit is lethal due to their size.

Because they are larger, their stinger should be larger and stronger, and their sting will affect a broader area than a bee or wasps. However, keep in mind that hornets will only sting if they feel threatened.

You should avoid wearing dark hues such as black, brown, and red clothes because hornets perceive dark colors as a threat.

Hornets, unlike some insects, do not die after stinging you. They can even sting you many times and expect you to carry on as if nothing occurred.

The sting of a hornet is extremely painful, but one sting may not be enough to harm you. However, if you have an adverse reaction to the sting of hornets sting you multiple times, their sting will impact you.

Hornets will bite you first to anchor themselves before proceeding to sting you. The stung area swells up, turns scarlet, and can even itch. If you experience allergic responses after treating the bite, visit a doctor.

Keep in mind that hornets will sting and continue to sting if you get too close to their nest. The best thing to do after a stung is to leave the area gently to avoid more stings.

Are Hornets Attracted to Light?

Hornets love and are attracted to light. They are active all day and most of the night, especially if they can get some light. That’s why you’ll see them hitting at your windows at night, trying to get to the light inside.

They rely on artificial lights like home lights and lamposts. Maybe because of their size, hornets have big eyes. Their large eyes will provide them with enhanced eyesight, which is why they are willing to venture out in low light.

If you have sensor lights installed throughout your home, you will notice that hornets are a nuisance. They may continue to hit the lights, causing them to turn on and off.

Out of the two hornets, the European hornet will most likely be the one seeking to get in via your windows. But don’t be alarmed; the hornets want to access the light, not trying to attack you.

See also  Can Bed Bugs and Roaches Live Together?

On the other hand, Bald-faced hornets are only active during the day and sleep at night.

Hornets are well-known for their capacity to assist in the eradication of harmful garden pests and pollinators. They may not be as effective as bees because pollen does not adhere to their bodies, but they play an important role in the environment.

The hornet’s body is smoother and may lack the fuzzy hairs that bees have, making it easier to transport pollen from one plant to another. They can, however, carry pollen grains despite their transparent dense hair on the thorax.

Some settings are extremely difficult for bees to survive in, and this is where hornets come in handy when it comes to pollination. The deep forest floors, which may have some strange flowers blossoming above the earth, are examples of such an environment.

Hornets’ aggressive character makes it easier for them to survive in such surroundings. Hornets have a sweet craving, according to legend. They’ll be found drinking nectar and dropping it on flowers as they migrate from one location to the next.

Hornets aren’t afraid of rain, and you can see them flying around even when it’s pouring. The hornet’s body structure is extremely sturdy, allowing it to fly in the rain.

Hornets and wasps are both members of the wasp family, and the two are frequently confused. There are, however, significant variances in size, color, and shape. The most well-known hornets are European hornets and bald-faced hornets.

Hornets’ sting can be extremely painful, and they will not stop stinging you until you are no longer a threat. If you’re allergic to other insects’ stings, a hornet’s sting can be quite harmful.

Light is a major attraction for hornets, and you can see them working at all hours of the day and night. They contribute to the ecosystem by acting as pollinators and removing insects that harm vegetation.