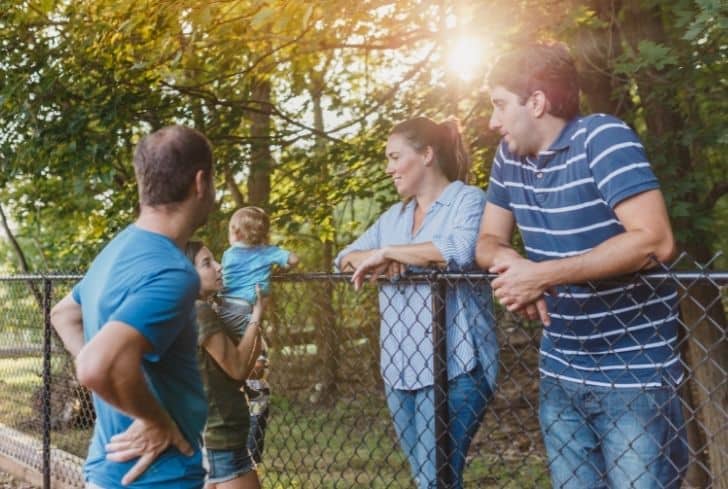 Every person is different. Some people enjoy keeping to themselves, despite living in rented apartments with several neighbors. It’s hard for people to understand why you’re keeping to yourself. Some people can even call you an arrogant or weird human being.

The truth is it’s difficult to avoid talking to neighbors if you’re living in a rented apartment. Why? You may likely bump into them one day. But if you live in a private property, especially one that’s fenced, you can mind your business with ease.

Now, is it possible to avoid talking to your neighbors? Yes, it’s doable, and if you’re interested in knowing how, read this post from the beginning to the end.

Some people can live in a neighborhood jam-packed with people and not talk to anyone throughout their stay. They like to be by themselves always or occupy themselves with various chores, so they don’t have any reason to socialize.

If you ask such persons why they don’t want to socialize or interact with their neighbors, you’ll hear different excuses. Now, let’s discuss some of the possible reasons you don’t want to associate with your neighbors.

1. You have social anxiety disorder

Many people are battling with social anxiety, but unfortunately, society doesn’t pay much attention. Shockingly, this condition can cripple one’s social life and more.

Now, what’s social anxiety? Firstly, social phobia is another word for social anxiety. It’s a condition where individuals feel uncomfortable whenever they find themselves in a social gathering.

Individuals with social phobia find it extremely difficult to initiate conversations with other people, interact with their neighbors, and meet new people or being in a social gathering.

Furthermore, people with social phobia are afraid that being in social settings will allow others to judge or scrutinize them in the most embarrassing manner. So, the best way to avoid facing such embarrassment is to avoid people.

So, if your neighbor enjoys keeping to themselves, don’t be quick to judge the person. The person you think doesn’t want to mingle or socialize with others because they’re arrogant might have social phobia.

See also  Neighbors Keep Feeding Squirrels: What To Do?

The shocking thing about this condition is that people who’re suffering from it are likely to engage in substance abuse.

A Pro Tip: People who have social phobia are aware they have the condition. But they feel powerless to change their status.

2. You don’t have much time to spare

Most people barely have time for themselves or their family, thanks to their careers or hobbies. You can either catch them moving from one state or country to another, attending crucial business meetings or tackling unfinished chores at the office now and then.

The only time such people have time for themselves or their families is during weekends. Sometimes, they spend their weekends away from home or busy trying to finish some chores at the office before the new week unfolds.

The truth is socializing with neighbors will be the last thing on such people’s minds. They would rather spend the little time they have with their family, pets, or rest properly, than socializing with the neighbors.

So, time can be one of the reasons you’re not socializing with the neighbors. But that shouldn’t be a problem, as long as you’re using your time for something more productive.

3. You assume your neighbors are troublesome

You have finally decided to keep to yourself, having witnessed how your neighbors are fighting and how they are saying hurtful words to each other. Now, you can’t imagine yourself getting into a fight with a neighbor.

Your neighbors’ attitudes must have helped to create a negative image in your head about them. You now see them as troublesome people and believe interacting with them would only offer them an opportunity to insult you.

In such a scenario, most people believe the best thing they can do to avoid getting into trouble with their perceived troublesome neighbors is to avoid them.

4. You believe that you have nothing in common with the neighbors

Your neighbors are crazy about football, while you’re not. You enjoy discussing science stuff, particularly abstract things, such as outer space. You feel your neighbors won’t show any interest, just like you don’t show interest in their football discussions.

In this scenario, you feel the best line of action is to avoid talking to your neighbors. You believe that by interacting with them, you might be tempted to share things you know about outer space or science, which might turn your neighbor off.

See also  6 Amazing Ways To Keep Ducks From Flying Away

Some people don’t like others invading their privacy. They value their privacy because it keeps them sane. So, they would do anything to prevent others from taking that away.

If you’re among such persons, you’re not wrong to demand that people stop invading your privacy. And the truth is, the more you avoid people, the less chance they would get to invade your privacy.

6. Your neighbors are gossiping too much

Another possible reason you don’t want to socialize with your neighbors is that they gossip too much and it irritates you.

You hate it when people gossip about you and don’t feel doing the same to other people is wise. But your neighbors take pleasure in doing it. And you don’t want to be their gossip partner. Thus, you believe avoiding them will be what’s best for you.

3 Simple Ways To Keep Neighbors at a Distance

Now, it’s clear that you have to keep your neighbors at a distance. You’re so not ready to interact with them. Unfortunately, your neighbors might not understand you immediately. They may keep coming and show more interest.

Well, if you’re tired of faking your greetings and smiles or forcing yourself to socialize with your neighbors, it’s time to take action. Follow these tips to keep your neighbors at a distance.

You can creatively build a wooden fence to demarcate your backyard from your neighbors’. But if that’s not possible, you can get more creative by using plants. You can plant the fast-growing columnar evergreen in tight spaces to provide privacy in your backyard.

The sheared privet hedge, Italian cypress or arborvitae, are good examples of plants you can use to provide privacy in your backyard. You can use either of these plants to block sightlines or separate adjoining yards.

2. Occupy yourself whenever you’re outdoor

If you’re sitting outside your apartment all by yourself and not doing anything, keep in mind that you’re indirectly inviting the neighbors to come and interact with you.

If you don’t want your neighbors’ company, ensure you’re with a book or laptop. If they see that you’re busy doing something, they’ll understand that you’re not ready for any conversation.

But the truth is some people won’t care whether you’re reading a book or busy doing something on your laptop. They’ll still go ahead and initiate a conversation with you. If you have such neighbors, don’t talk rudely to them whenever they come around.

Instead, shut them off in a polite way. Your response whenever they ask you questions should give them the idea that you’re not ready to interact with them. Your answer should be casual. Something like this; yes, no, oh, really, okay, and sometimes, don’t even respond to them.

See also  Can My Neighbor Record My Backyard (And My Property)?

3. Use the silent treatment

The silent treatment might make your neighbors think that you’re rude. But the fact that you’ll achieve your aim is enough reason to give it a shot.

So, how should you use the silent treatment? Whenever your neighbors extend their greetings to you, turn your back at them and walk away. Act like you didn’t see or hear them. If you want, you can make eye contact and walk away. Don’t respond or make any sound.

You can also choose to return your neighbors’ greetings, but the conversation should end there. If they try to initiate further conversation, give them the silent treatment.

How Do You Politely Ignore a Neighbor?

Sometimes, you need to tackle problems head-on instead of using strategies to avoid them. If you’re not comfortable interacting with your neighbors, approach them and explain yourself.

There’s nothing wrong with letting your neighbors know that you’re not a social person and would like to be left alone. Explain to them that there’s no bad blood and it’s nothing personal.

If your neighbors don’t listen to your pleas, seek the help of your area’s property managers or homeowners association. But if you have reasons to believe your life is in danger, inform the police about your predicament.

What Can You Do With Disrespectful Neighbors?

You can deal with disrespectful neighbors in several ways without getting into an altercation with them. Firstly, please make an effort to approach them in person. If that doesn’t work out, invite a mediator. You can report your neighbors to their landlords or homeowners association.

Again, if you feel that you’re in danger because of the caliber of persons you have as neighbors, please get the police involved.

This post offers you some tips on how to avoid talking to neighbors. People differ in their wants and desires, including what they are comfortable doing. So, if you feel uncomfortable socializing with your neighbors and want to avoid them, they should respect your decision.

We shared various tips to help you avoid your neighbors and put disrespectful neighbors in their places. You can deploy these tips to lead a peaceful life, according to your terms. It’s your life, your apartment, and your decision. So, nobody has the right to force you to interact with them when you don’t feel comfortable doing it.