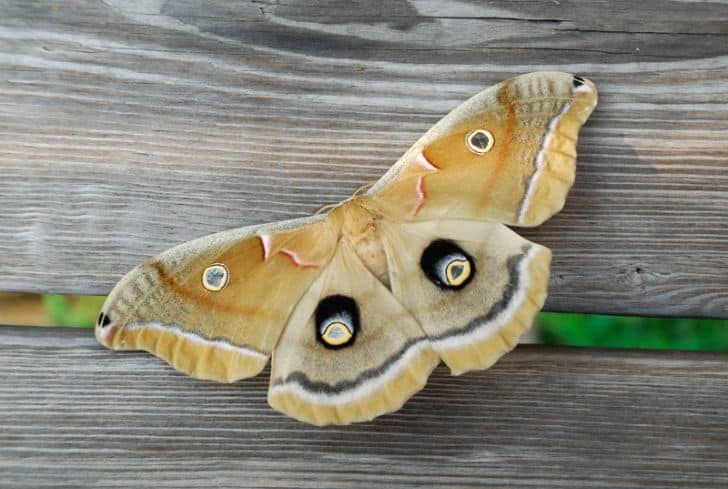 No, moths are not blind. On the contrary, their eyesight is so good that they can see ultraviolet rays, unlike humans. The moth’s vision alters as it progresses through its life cycle. Even though a moth caterpillar can’t see well, its bare eyes distinguish between light and dark.

Moths are usually seen flying toward the light, leading to the idea that they are blind. However, their attraction to light is due to a condition known as phototaxis. When moths leave the light, they become disoriented because the bright light renders them blind though temporarily.

But that doesn’t mean they are blind. Moths have long used the moon as a navigational aid, flying in a straight path to reach the moon or the stars. Artificial lights bewilder the moths, causing them to move in circles as they attempt to ascertain if they are still on the right path.

Do Moths Have Eyes?

Moths have two sets of eyes. They have simple eyes that enable more detailed sensing of motion and colors. They also have compound eyes that help them get a good picture of their surroundings.

Their eyes have high contrast sensitivity, which is necessary for the moths to fly at night. While they appear to have two regular eyes on the outside, each eye comprises numerous smaller units.

Let’s differentiate between the two types of eyes:

The other name for simple eyes is ocelli. They are called simple because ocelli use a single lens for their vision. Unlike compound eyes, which have thousands of lenses, their structure is simple.

Their simple structure does not indicate that their function is limited; instead, it shows that they have a higher level of vision. The ability to detect light and go a step further by contrasting two objects is the primary function of ocelli for the moth.

They can distinguish between two different objects and detect motion once they can contrast the two differing lights.

Simple eyes have a sharper field of vision than compound eyes, allowing them to focus on and see a specific area with more clarity.

They can also see short-wavelength colors using a brighter light than humans because of their simple eyes.

Because their compound eyes are more prominent and take up a large portion of their face, it is easier to see them. Each compound eye has ommatidium, smaller multiple units (individual lens). After that, each lens then captures any light directly in front of it.

The images are eventually sent to the moth’s nervous system via an optic nerve. The nervous system is in charge of collecting all of these images into a complete picture of the moth’s surroundings. This factor allows the moth to see a large area without turning its head.

The moth’s 360-degree vision allows it to see any predator coming from any direction. They do, however, have a blind spot in their bodies. Their bodily structure prevents the moths from having a full 360-degree view of their surroundings.

The broad coverage of compound eyes has a limitation in that the object tends to be unclear. Even though the compound eyes allow the moths to see many photos simultaneously, the images are blurred, making motion detection and contrast impossible.

Are Moths Attracted to Light?

Moths are night-flying insects drawn to any light source to see clearly. The reason for this is that moths use the moon to navigate. When the moth encounters another source of light, it becomes distracted.

Moths have a condition known as phototaxis which brings an automatic movement toward the light. The sudden light causes temporary blindness because of their eyes’ inability to adjust quickly.

Moths are attracted to light by associating light with security more than darkness. Unlike humans, who are temporarily blinded by strong light, moths react differently. Because their light adaptation process is faster than their dark adaptation mechanism, they prefer to go toward the light.

What are Moths Attracted to?

Apart from light, moths are attracted to several other things. Let’s have a look at a few of them.

While most moths are nocturnal, several moth species are crepuscular (active at sunset or sunrise) or diurnal (active during the day). Each preference has some advantages. Their eyes are perfectly adapted to seeing at night, for the nocturnal moths. They prefer nighttime because there is a lesser chance of being seen and eaten and less competition for food.

The moths that prefer being active during the day get more energy from the sun and have more light to go about their activities. The moths that are active at sunset get to enjoy the advantages of both.

Nocturnal moths are thought to have evolved long before the invention of lights by humans. They learned to navigate by using celestial bodies such as the moon and stars. They use the earth’s magnetic field when they can’t see the two.

Yes, moths can see and distinguish between colors. Some insects may only see a narrow range of colors and may not be able to tell the difference between colors. On the other hand, photoreceptors in moth eyes make it easier for moths to detect light.

Blue, yellow, and ultraviolet are among the colors that each eye receptor of a moth can detect. Moths can also see colors that aren’t visible to a human’s naked eye due to their receptors. Their ability to see ultraviolet wavelengths is the only factor that allows moths to see clearly during their nighttime activities.

Ultraviolet and white light are considered to be attractive to moths. The wavelength of both colors is shorter. A high number of moths can be attracted to blue light. As a result, moths frequently hit porch or street lights with bright lights.

The moth is attracted to flowers with blue, yellow, or violet wavelengths due to its attraction to color.

Even though moths have various species, most will not bite you because they don’t have a mouth or have an ineffective mouth that can’t bite you. Neither will they sting you. Moths prefer to feed on nectar, which explains why they aren’t interested in biting you.

However, this does not rule out the possibility of moths being a threat to humans. Moths can harm you in several ways. Let’s have a look at a few examples:

Some moth species’ have spines (hair) that can cause skin allergic reactions that look like hives. For several minutes, you may also experience pain or itching.

Although most adult moths do not bite or sting, you may be wondering what is causing the holes in your clothing.  In their larvae stage, moths are known as caterpillars. It’s those caterpillars that will cause holes in your fabrics.

The misconception that moths are blind has been dispelled in this article. Several factors cause people to be puzzled by moths. Moths are attracted to light, gardens, dirty clothing, dark, humid places, and animal fibers.

Depending on the species, moths are active at night, at sunset or before sunrise, or during the day. They also enjoy color and, unlike humans, can see some ultraviolet wavelengths.

Moths can harm you in several ways, including poisoning, causing allergic reactions, biting, and contaminating your food.